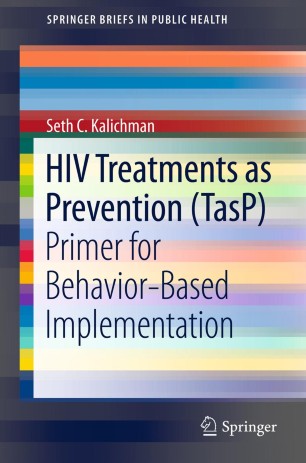 HIV Treatment as Prevention: Primer for Behavior-Based Implementation provides the first practical guide to integrating behavioral prevention with antiretroviral therapies for people living with HIV infection. This brief book discusses the historical and social context embedding the shifting landscape in HIV prevention, where the use of effective treatments have become the focus of HIV prevention.  While using treatments for prevention is promising, the history of HIV prevention offers several important pitfalls that mu­st be avoided if HIV treatments are to ultimately succeed in preventing new HIV infections. Lessons learned from the successes and failures of other biomedical technologies used in HIV prevention, specifically syringes, condoms, and HIV testing are critical to the success of using HIV treatments for prevention.

HIV Treatment as Prevention: Primer for Behavior-Based Implementation summarizes the scientific evidence for advancing the use of antiretroviral therapies for HIV prevention. The evidence makes clear that HIV treatments can prevent HIV transmission, but will fail if behavioral aspects of treatment and HIV transmission are ignored.   Of greatest concern are medication adherence and risks for contracting other sexually transmitted infections. Placing HIV treatment within the context of behavioral interventions for maintaining medication adherence and reducing sexual risk behaviors is therefore essential to the future of HIV prevention.   HIV Treatment as Prevention: Primer for Behavior-Based Implementation highlights two pioneering behavioral interventions aimed at maximizing the effects of antiretroviral therapies for preventing HIV transmission. One of the interventions, developed by the Author’s research team, is discussed in detail and the intervention manual is included as an Appendix.

Professor Kalichman dedicates his research to preventing the spread of HIV/AIDS and caring for those affected by the HIV epidemic. His research is focused in the southern United States and South Africa. His work has been continuously and exclusively funded by the National Institutes of Health since 1992. He was previously on the faculties of Loyola University of Chicago, Georgia State University, and the Medical College of Wisconsin where he worked under the direction of Jeffrey A. Kelly to help establish the Center for AIDS Intervention Research (CAIR). He is currently the director of the Southeast HIV and AIDS Research and Evaluation (SHARE) Project, a research program within the AIDS Survival Project in Atlanta, Georgia. His research in South Africa is in collaboration with the Human Sciences Research Council. Professor Kalichman serves on NIH grant review panels, has over 200 peer-reviewed journal articles, and has authored and edited five books in the area of HIV/AIDS prevention and care services, including Positive Prevention, recently published by Springer. He is also the current editor of the bimonthly journal AIDS and Behavior. Professor Kalichman was the recipient of the 1997 Early Career Award in Health Psychology from the American Psychological Association and the 2005 Distinguished Scientist Award from the Society for Behavioral Medicine.

“This is an overview of various behavioral interventions that may be integrated with antiretroviral medications to prevent persons living with HIV from transmitting the virus to others. … students and practitioners in the areas of nursing, public health, social work, and medicine who desire a better understanding of HIV prevention efforts could benefit by reading it. More specifically, the book provides practical information for those interested in incorporating behavioral-based interventions into their research and practice.” (Michael G. Kavan, Doody’s Review Service, January, 2013)