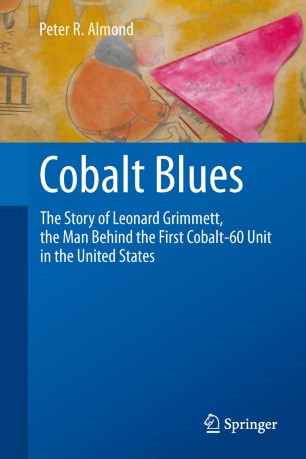 The Story of Leonard Grimmett, the Man Behind the First Cobalt-60 Unit in the United States

For the latter half of the 20th century, cobalt-60 units were the mainstay of radiation treatments for cancer. Cobalt Blues describes the development of the first cobalt-60 unit in the United States and the man behind it, Leonard Grimmett. Conceptually conceived before World War II, it only became possible because of the development of nuclear reactors during the war.

Although Grimmett conceived of and published his ideas first, the Canadians built the first units because of the capability of their reactor to produce more suitable cobalt-60 sources. This book tells the story of how Grimmett and others came together at the time that the U S Atomic Energy Agency was pushing the use of radioactivity in medicine. Due to his sudden death, very little information about Grimmett was known until recently, when various documents have come to light, allowing the full story to be told.

Dr. Almond received his undergraduate honors degree in physics from Nottingham University and his training in medical physics from Bristol University. He moved to the United States in 1959 and earned his master’s and doctoral degrees in nuclear physics from Rice University in Houston. From 1964 to 1985 he worked at The University of Texas M.D. Anderson Cancer Center in Houston, where he served as the head of the Radiation Physics section and director of the Cyclotron Unit and Professor of Biophysics. He is now retired but teaches part-time and is writing the early history of the physics department at MDACC.

“Author Peter R. Almond, Ph. D., used Grimmett’s journals, notes and scientific documents to paint an intimate portrait of the man’s journey from England to Texas and the resolve Grimmett dedicated to the effort to see that his life’s work and the widespread application of radiation therapy would become a reality. … This is a good resource for those looking for a research reference and a nice retrospective for connoisseurs of medical history … .” (Matt Ragghianti, ASRT Scanner, February-March, 2016)