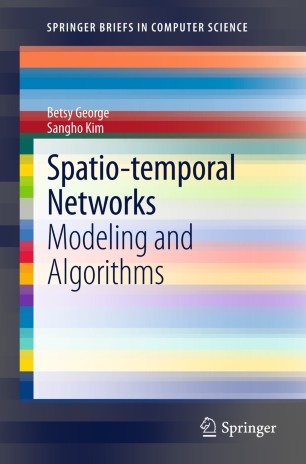 Spatio-temporal networks (STN)are spatial networks whose topology and/or attributes change with time. These are encountered in many critical areas of everyday life such as transportation networks, electric power distribution grids, and social networks of mobile users. STN modeling and computations raise significant challenges. The model must meet the conflicting requirements of simplicity and adequate support for efficient algorithms. Another challenge is to address the change in the semantics of common graph operations, such as, shortest path computation assuming different semantics, or when temporal dimension is added. Also paradigms (e.g. dynamic programming) used in algorithm design may be ineffective since their assumptions (e.g. stationary ranking of candidates) may be violated by the dynamic nature of STNs.

In recent years, STNs have attracted attention in research. New representations have been proposed along with algorithms to perform key STN operations, while accounting for their time dependence. Designing a STN database would require the development of data models, query languages, and indexing methods to efficiently represent, query, store, and manage time-variant properties of the network. The purpose of Spatio-temporal Networks: Modeling and Algorithms is to explore this design at the conceptual, logical, and physical level. Models used to represent STNs are explored and analyzed. STN operations, with an emphasis on their altered semantics with the addition of temporal dimension, are also addressed.

“This monograph discusses spatio-temporal networks (STNs). … The book is extremely focused and well-written. … manuscript should be accessible to a number of interested researchers and not just the practitioners in the field of spatial databases and STNs. … The work is definitely incremental with respect to the extant work in the literature. … authors have done a thorough job of explaining all the details of each and every algorithm. The implementations are original. … Every concept is introduced, explained and then applied in examples.” (K. Subramani, Zentralblatt MATH, Vol. 1263, 2013)
Buy options