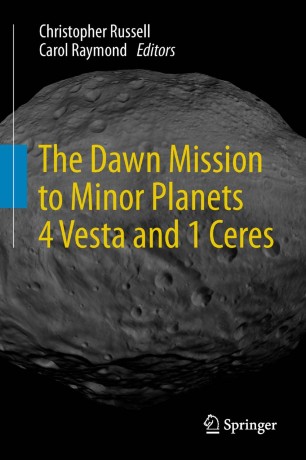 The Dawn Mission to Minor Planets 4 Vesta and 1 Ceres

DAWN is the first mission to orbit a main belt asteroid and the first scientific mission to use ion propulsion.  Major objectives of this mission include mapping of the surfaces of 4 Vesta and 1 Ceres,  determining its topography from stereo measurements, determining its mineralogy, measuring its elemental composition and obtaining  gravity data.  This book describes the DAWN mission, its exploration and scientific objectives, the instruments that accomplish those objectives, the operations plan and the education and outreach plan.  It is directed to those studying asteroids and the evolution of the solar system.

This volume will be a valuable reference for anyone who uses data from the instruments of the DAWN mission.

Dr. Carol Raymond earned her B.S. in Geology and Physics from the University of Georgia, her M.A. and M.Phil  in Geological Sciences from Columbia University and her Ph.D. in Geological Sciences from Columbia University. Her current research interests include solar system evolution (with a focus on the geophysical evolution of Mars, Vesta and Ceres), the Sun-Earth system and solid Earth/climate interactions. She is also the recipient of the NASA Magset Group Achievement Award.