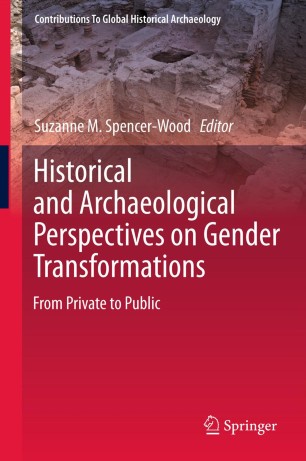 From Private to Public

In many facets of Western culture, including archaeology, there remains a legacy of perceiving gender divisions as natural, innate, and biological in origin. Historical and Archaeological Perspectives on Gender Transformations: From Private to Public denaturalizes the gender dichotomy between domestic women versus public men that permeates Western culture and is often taken for granted in our analyses and interpretations of the meanings of material culture.   Chapters discuss how gender ideologies, identities, relationships, power dynamics, and practices were materially changed in the past, thus showing how they could be changed in the future. By showing that the domestic or private sphere has always been public in some ways, this book contributes to the major goal of denaturalizing gender stereotypes.

This volume builds on previous feminist critiques and research in historical archaeology showing that the supposedly mutually exclusive “separate spheres” in the binary gender ideology were not completely separate in actual practice. It is organized conceptually, according to ways that personal, private, intimate, and domestic affairs became political and public in the past, either by bringing aspects of the public sphere into the supposedly private domestic sphere, or by transforming aspects of the domestic sphere into the public sphere. As a whole the volume flows logically in four sections.

·         The Private is Political: The Public Sphere inside the Domestic Sphere of the Home

·         How External Colonization made Domestic, Intimate, and Bodily Affairs Public

Historical and Archaeological Perspectives on Gender Transformations: From Private to Public  has clear implications for historical archaeology, a discipline many would argue is dedicated to exposing inequality in the present by tracing the material genealogies of ideologies such as capitalism, racism, and sexism. It is a great resource for professionals and students in the fields of history, historical archaeology, cultural geography, women’s studies, American studies, and material culture studies, and anybody who is interested in understanding the past in order to understand the present.