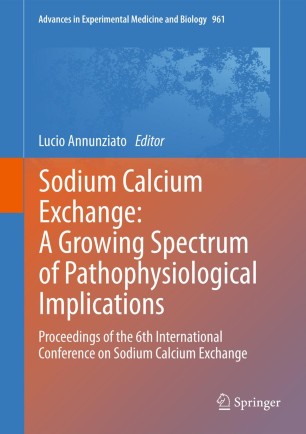 Proceedings of the 6th International Conference on Sodium Calcium Exchange

Part of the Advances in Experimental Medicine and Biology book series (AEMB, volume 961)

This book reports the text of the lectures of the 6th International Conference on Sodium Calcium Exchange held in Lacco Ameno in the Island of Ischia in the Gulf of Naples, Italy, from October 1 to October 5, 2011.

The present book uncovers the most striking new findings on NCX that emerged since the previous Conference on Sodium Calcium Exchange, such as the structural dissection of the molecular determinants of Ca2+ sensitivity of the exchanger, the epigenetic regulation of ncx1 gene, the molecular identification of the mitochondrial Sodium Calcium Exchanger, and the discovery of NCX in unexpected anatomical locations such as the female reproductive tract.

The book is organized into 11 parts covering NCX structural aspects, genetic and epigenetic regulation, regulatory mechanisms, subcellular localization in mitochondria, involvement in neurodegenerative diseases and in immune regulation, and the role of the cardiovascular and endocrine systems, as well as diabetes in physiology and pathophysiology. Selected chapters of the book are also devoted to the interaction of NCKX and other ion channels and transporters with NCX, like ASICs, TRPM, and NHE.

Lucio Annunziato is Professor of Pharmacology and chairman of the Department of Neuroscience in the School of Medicine at the “Federico II” University of Naples, Italy. He is coordinator of the University’s Neuroscience Ph.D. program. He is also past-president of the Italian Society for Neuroscience. Dr. Annunziato has authored more that 190 full papers in peer reviewed international journals in the field of neuroscience and molecular pharmacology of plasmamembrane transporters and ionic channels involved in the pathophysiology of stroke and other neurodegenerative diseases.