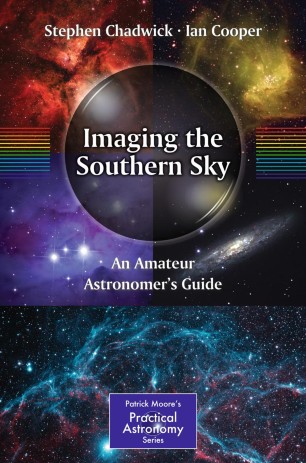 "If you're looking for a handy reference guide to help you image and explore the many splendors of the southern sky, Imaging the Southern Sky is the book for you. The work features not only stunning color images, all taken by Stephen Chadwick, of the best galaxies, nebulae, and clusters available to astrophotographers, but also lesser-known objects, some of which have gone largely unexplored!

Beginners and experienced observers alike should appreciate the book's remarkable imagery and simple text, which provides concise and accurate information on each object and its epoch 2000.0 position, and also expert testimony on its visual nature.

Each object essay also includes a section on technical information that should help astrophotographers in their planning, including telescope aperture, focal length and ratio, camera used, exposure times, and field size.

As a charming bonus, the authors have taken the liberty to name many of the lesser-known objects to reflect their New Zealand heritage. Constellation by constellation, from Apus to Volans, Imaging the Southern Sky explores the night sky in a way that should appeal to sky lovers of all ages."

Stephen Chadwick originates from England but moved to New Zealand in 2004. The superb dark skies near Himatangi Beach, in the Manawatu, provide superb conditions for undertaking deep sky astrophotography of astronomical objects south of the celestial equator. Stephen has had images published in Astronomy Now and the BBC's Sky at Night magazine and is the president of the Horowhenua Astronomical Society. All the astro-images presented in this book were taken by Stephen over a two and a half year period.

Ian Cooper has been active in amateur astronomy for nearly four decades. In that time, Ian has become a specialist in deep-sky observing and was very active in deep-sky astrophotography at a time when hypersensitizing film to enhance the film's capabilities was as good as it got. Being an amateur Ian was not strictly limited to deep-sky observing. Ian often contributed comet observations to the R.A.S.N.Z. Comet and Minor Planet Section, as well as acting as the North Island Coordinator of the Aurora & Solar Section of the R.A.S.N.Z. Ian has submitted over fifty auroral observations to that section from his home in the lower North Island of New Zealand since 1978.

Ian Cooper is also a co-author of the "Night Sky Observer's Guide, Vol. III - The Southern Sky" (Willmann-Bell, 2009). This book proved a great source of detailed information to both authors as they planned their strategy for this book. Ian currently fronts an astronomical television show called "Southern Nights" for a regional television company.

“The book is a compendious colour atlas of all that is glamorous south of the celestial equator. … This volume should be on the shelves of any amateur astronomers who aspire to produce professional-standard images, whether they live north or south of the equator. And for casual stargazers, it doubles as an excellent guide to the southern hemisphere’s most sumptuous star clusters. Highly recommended.” (Fred Watson, The Observatory, Vol. 134 (1239), April, 2014)