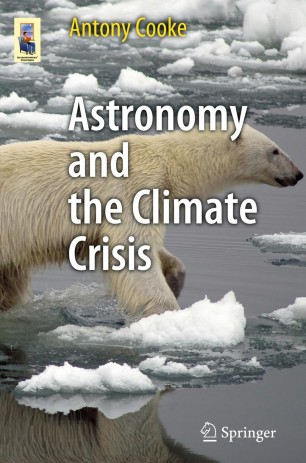 Astronomy and the Climate Crisis

Climate change is one of the most hotly debated issues of today. Increasing global temperatures will impact all of us. There are more questions than answers, however, and sweeping statements on the subject made by public figures, often with little scientific understanding, only further
confuses public opinion.

Astronomical factors, apart from passing references to the Sun, are given short shrift in relation to climate change. However, they might be amongst the major determinants of it.  A presentation of those that have been studied that some scientists suspect might be involved are featured in this book. Included is an in-depth look at the physics of climate itself, the potential effects of the Sun, solar storms, sunspots, solar variability, the magnetosphere, solar cycles, influences of nearby planets, orbital factors, cosmic rays, possible galactic influences, monitoring from space, even climate change elsewhere in the solar system, and much more.

The greatest challenge climate change scientists face is determining actual world climate statistics and analyzing the historical record. Another challenge lies in evaluating all of the various theories that have been proposed. Is the current climate crisis completely human-induced, as some
very credible sources say, or only partly human-induced.? Is carbon dioxide even the real threat? If not, what is?

Astronomy and the Climate Crisis is a serious attempt to reconcile the various scientific climate change studies, highlighting in particular the astronomical factors that are possibly hidden culprits. This book can help you to become
informed and join the debate. You might be very surprised at what you find out!

It has been said that music and astronomy go hand in hand. Antony Cooke's passion for both fields was clear very early in his life, but music ultimately would claim his career. A cellist of international renown, Cooke has been one of the leading players in the Hollywood recording industry for many years, having been Associate Professor of Cello at Northwestern University in Chicago until 1983. He is a U.S. citizen but was born in Australia and educated in London, receiving numerous prizes and awards, including the Gold Medal at the London Music Festival.

The dual nature of Cooke's interests continued, astronomy remaining the counterbalance in his life. Always looking for ways to improve his existence at the eyepiece, he has constructed many telescopes over the years, with increasing sizes being the hallmark of his (often-quirky) designs. He has published four books for Springer, Visual Astronomy in the Suburbs (2003), Visual Astronomy Under Dark Skies (2005), Make Time for the Stars (2009) and recently, Dark Nebulae, Dark Lanes and Dust Belts (2012).

“This book thoroughly covers the ways in which global warming has been studied and conclusions drawn. … The book reveals the great amount of research conducted on climate change and its causes, and one needs some exposure to astronomy to gain an understanding of much of it. Overall, a valuable addition to the literature; useful for libraries serving schools at the graduate level of study. Summing Up: Recommended. Graduate students and above.” (A. R. Upgren, Choice, Vol. 50 (8), April, 2013)
Buy options