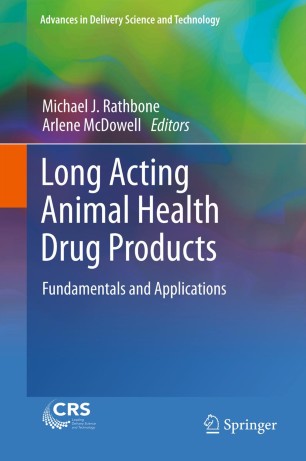 This authoritative book is a comprehensive guide on the theories, applications, and challenges associated with the design and development of long acting veterinary formulations.  The volume acts as a reference to the animal health formulation scientist and contains chapters written by some of the leading experts in the field.  In addition it offers additional details through a mixture of figures, tables, and references to provide information not found in other similar texts.

The book covers everything a student or a formulation scientist in industry or academia needs to know about this unique drug delivery field. It provides an overview of the fundamental science necessary for the rational design and development of veterinary animal health products, and provides in-depth descriptions of the technologies that are currently commercially available for the prolonged delivery of drugs to animals.

Long Acting Animal Health Drug Products: Fundamentals and Applications will be indispensible to scientists interested in the science and technology of drug delivery to animals and be essential for those developing long acting delivery systems for farmed and companion animals.

Michael John Rathbone obtained his undergraduate degree in Pharmacy at Leicester Polytechnic, UK (1980), and Ph.D. in Pharmaceutics from the University of Aston, Birmingham, UK (1986). Dr. Rathbone is the Professor of Pharmaceutical Technology and Head, Division of Pharmacy, International Medical University, Kuala Kumpur, Malaysia. Prior to this Dr. Rathbone lectured in the Schools of Pharmacy, Griffith University, Australia, Otago University, New Zealand and the Central Institute of Technology, New Zealand. Dr. Rathbone was also the Director of Research at InterAg, NZ, where he spearheaded the companies modified release drug delivery research and directed their national and global collaborative research activities. Over his career Dr. Rathbone has innovated many novel long acting veterinary drug delivery systems, several of which have been commercialized. Dr. Rathbones research interests are in the area of systemic drug delivery via mucosal sites, the development of modified release drug delivery systems and controlled release veterinary drug delivery.  Dr. Rathbone has published over 150 scientific and professional papers, review articles, book chapters and scientific abstracts and is the co-inventor of numerous patents. Dr. Rathbone has been a Member of the Controlled Release Society for 15 years and has served on the Board of Governors, Board of Scientific Advisors and Member-at-Large. Dr. Rathbone was the recipient of The CRS Distinguished Service Award, and is a Fellow of the Controlled Release Society.

Arlene McDowell is a Senior Lecturer at New Zealand’s National School of Pharmacy, University of Otago, Dunedin, New Zealand and an Honorary Research Associate, School of Biological Sciences, Vitoria University, Wellington, New Zealand.  Dr. McDowell graduated from the University of Melbourne first in 1993 with a Bachelor of Science (Hons) and then in 1999 with a Masters of Science and subsequently worked at the University of Sydney as an Associate Lecturer.  In 2005 she completed her Ph.D. at the University Otago on designing oral delivery systems for biocontrol agents for the Australian brushtail possum, a wild pest species in New Zealand.  Dr. McDowell has co-authored over 40 scientific and research papers, reviews, book chapters and scientific abstracts.  She has also supervised a number of postgraduate research students and in 2009, Dr. McDowell was awarded an Otago University Student Association Teaching Award for her undergraduate teaching in the Bachelor of Pharmacy programme.