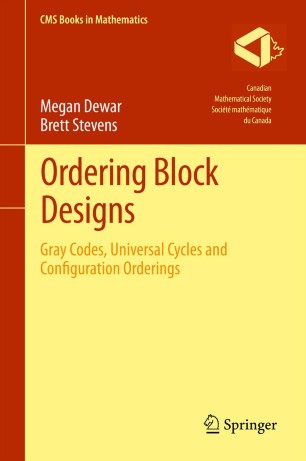 The study of combinatorial block designs is a vibrant area of combinatorial mathematics with connections to finite geometries, graph theory, coding theory and statistics. The practice of ordering combinatorial objects can trace its roots to bell ringing which originated in 17th century England, but only emerged as a significant modern research area with the work of F. Gray and N. de Bruijn.

These two fascinating areas of mathematics are brought together for the first time in this book. It presents new terminology and concepts which unify existing and recent results from a wide variety of sources. In order to provide a complete introduction and survey, the book begins with background material on combinatorial block designs and combinatorial orderings, including Gray codes — the most common and well-studied combinatorial ordering concept — and universal cycles. The central chapter discusses how ordering concepts can be applied to block designs, with definitions from existing (configuration orderings) and new (Gray codes and universal cycles for designs) research. Two chapters are devoted to a survey of results in the field, including illustrative proofs and examples. The book concludes with a discussion of connections to a broad range of applications in computer science, engineering and statistics.

This book will appeal to both graduate students and researchers. Each chapter contains worked examples and proofs, complete reference lists, exercises and a list of conjectures and open problems. Practitioners will also find the book appealing for its accessible, self-contained introduction to the mathematics behind the applications.

Megan Dewar is an Adjunct Professor at the School of Mathematics and Statistics, Carleton University.

Brett Stevens is a Professor at the School of Mathematics and Statistics, Carleton University.

“This book offers a comprehensive survey of order structures on the blocks of combinatorial designs. … I found the book to be a very pleasant read. … Throughout, there are plenty of nice examples and diagrams to bring the subject to life. References are listed at the end of each chapter, rather than at the end of the book. This structure works well here. … This is obviously very welcome for students and other researchers … .” (Peter James Dukes, Mathematical Reviews, May, 2013)

“This monograph focuses on ordered blocks where the difference between adjacent blocks is minimal. … the book is only of interest to mathematical researchers in the field of combinatorial design theory. Each chapter includes some problem exercises … and a list of references. The authors have taken great care in explaining the mathematical formulae, using figures where applicable.” (Klaus Galensa, Computing Reviews, January, 2013)