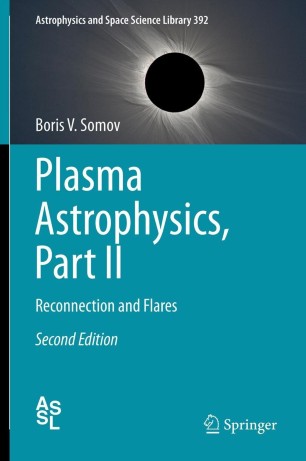 This two-part book is devoted to classic fundamentals and current practices and perspectives of modern plasma astrophysics. This second part discusses the physics of magnetic reconnection and flares of electromagnetic origin in space plasmas in the solar system, single and double stars, relativistic objects, accretion disks and their coronae. More than 25% of the text is updated from the first edition, including the additions of new figures, equations and entire sections on topics such as topological triggers for solar flares and the magnetospheric physics problem.

This book is aimed at professional researchers in astrophysics, but it will also be useful to graduate students in space sciences, geophysics, applied physics and mathematics, especially those seeking a unified view of plasma physics and fluid mechanics.

Boris Somov is a professor at the Moscow State University, laureate of the State Prize of the former USSR (the Honor Prize of the USSR Government), and laureate of the IBC Award, “2000 Outstanding People of the 20th Century,” in honor of his contribution to space physics and astrophysics.

Five well-known monographs, “Physical Processes in Solar Flares,” “Fundamentals of Cosmic Electrodynamics,” “Cosmic Plasma Physics” and “Plasma Astrophysics, Parts I&II (First Edition)” by Boris Somov were published by Kluwer Academic Publishers and Springer in 1992, 1994, 2000 and 2006, respectively. He has contributed more than 280 articles to the scientific literature in solar physics and plasma astrophysics.