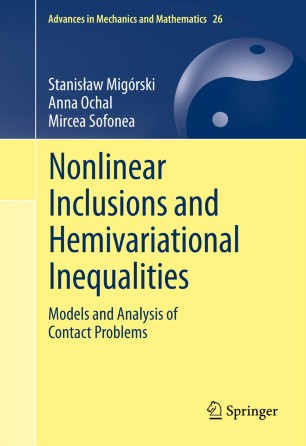 Part of the Advances in Mechanics and Mathematics book series (AMMA, volume 26)

Nonlinear Inclusions and Hemivariational Inequalities presents a broad insight into the theory of inclusions, hemivariational inequalities, and their applications to Contact Mechanics. The content of this volume gathers recent results which are published here for the first time and gives a largely self-contained and rigorous introduction to mathematical analysis of contact problems. The book will be of particular interest to students and young researchers in applied and pure mathematics, civil, aeronautical and mechanical engineering, and may also prove suitable as a supplementary text for an advanced one or two semester specialized course in mathematical modeling.

This book introduces the reader the theory of nonlinear inclusions and hemivariational inequalities with emphasis on the study of Contact Mechanics. It covers both abstract existence and uniqueness results as well as the study of specific contact problems, including their modeling and variational analysis. New mathematical methods are introduced and applied in the study of nonlinear problems, which describe the contact between a deformable body and a foundation.

The text is divided into three parts. Part I, entitled Background of Functional Analysis, gives an overview of nonlinear and functional analysis, function spaces, and calculus of nonsmooth operators. The material presented may be useful to students and researchers from a broad range of mathematics and mathematical disciplines. Part II concerns Nonlinear Inclusions and Hemivariational Inequalities and is the core of the text in terms of theory. Part III, entitled Modeling and Analysis of Contact Problems shows applications of theory in static and dynamic contact problems with deformable bodies, where the material behavior is modeled with both elastic and viscoelastic constitutive laws. Particular attention is paid to the study of contact problems with piezoelectric materials. Bibliographical notes presented at the end of each part are valuable for further study.