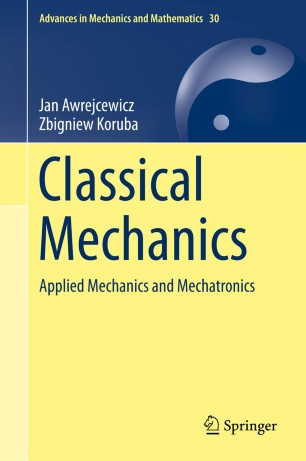 Part of the Advances in Mechanics and Mathematics book series (AMMA, volume 30)

This is the final volume of a triad of works by Jan Awrejcewicz (this third book with Zbigniew Koruba)  devoted to classical mechanics. Classical Mechanics: Mechanics and Mechatronics   presents a unique approach to studying mechanical and electromagnetic processes occurring in applied mechanics and mechatronics with emphasis on theory, modeling, and analysis and control of gyropscopic devices, including military applications. This volume address a wide spectrum of graduate students, postgraduate students, researchers, and instructors from the field of mechanics, this volume, and has a strong focus on advanced applications that will be of particular use and interest to engineers and designers practicing in the mechanical/mechatronic industry.

Chapter 1 deals with dynamics in mechatronic systems. Dynamics of a rigid spherical body is studied in Chapter 2 with emphasis on applications.  Chapters 3 and 4 are dedicated to the theory, evolution, and dynamics and control of the gyroscope and Chapter 5 focuses on gyroscopic control in the self-guidance systems of flying objects.

Jan Awrejcewicz is the 2011 winner of the Humboldt Prize. This award is granted from the Alexander von Humboldt Foundation in Germany. The award is based on a reasearcher's entire achievements to date, whose fundamental discoveries, new theories or insights have had significant impact on their own discipline and who are expected to continue producing cutting-edge achievements in the future. Prof. Awrejcewicz is also the main author of “Nonsmooth Dynamics of Contacting Thermoelastic Bodies”, © 2009, Springer (AMMA v. 16), 978-0-387-09562-0. He is also the sole editor of “Modeling, Simulation and Control of Nonlinear Engineering Dynamical Systems”, © 2009 Springer, 978-1-4020-8777-6.