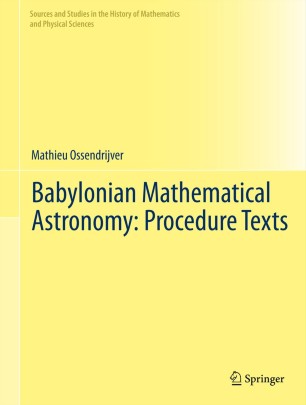 Babylonian Mathematical Astronomy: Procedure Texts contains a new analysis of the procedure texts of Babylonian mathematical astronomy. These cuneiform tablets, excavated in Babylon and Uruk and dating from 350‒50 BCE, contain computational instructions that represent the earliest known form of mathematical astronomy of the ancient world. The targeted readership includes assyriologists, historians of science, astronomers and others with an interest in Babylonian astronomy.

The book includes new translations of all 108 available tablets that are based on a modern approach incorporating recent insights from assyriology and translation science. All translations are accompanied by commentaries and photographs of the tablets. The preceding chapters are devoted to documentary, lexical, semantic, mathematical and astronomical aspects of the procedure texts. Special attention is given to issues of mathematical representation, a topic that had previously been largely ignored. Mathematical concepts are presented in a didactic fashion, setting out from the most elementary ones (numbers and elementary operations) to more complex ones (algorithms and computational systems). Chapters devoted to the planets and the Moon contain updated and expanded reconstructions and astronomical interpretations of the algorithms.