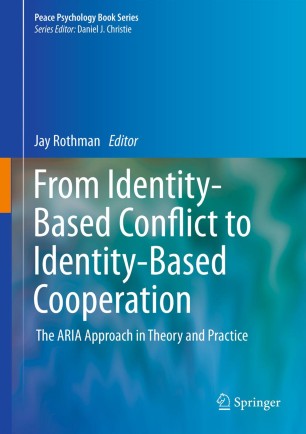 The ARIA Approach in Theory and Practice

Identity-based conflicts are the deepest and often most destructive form of conflict. In these conflicts people's very sense of self is challenged, disrespected and undermined by others in cyclical and reinforcing ways. The authors in From Identity-Based Conflict to Identity-Based Cooperation take up the challenge of creatively engaging these conflicts and transforming them into shared purpose and joint action. In this book, they describe various uses of the conceptual and applied framework known as "ARIA," a process developed in the field over the past two decades for moving Antagonists into Resonance and from there in to creative Invention and Action (i.e. A.R.I.A.).

Each chapter is organized around "peace stories" describing efforts to creatively engage identity-based conflicts and promote cooperation at different levels of social organization (from interpersonal to international) in various regions around the world. In addition to chapters on theory and applications of ARIA, the book also presents "how-to" sections. This book will be a great resource for practitioners, researchers, scholars and students of conflict and its creative engagement in theory and practice.

About the Editor: Jay Rothman is professor in the program on Negotiation and Conflict Management at Bar Ilan University in Ramat Gan, Israel. He is also the President of the US-based ARIA Group, Inc., a conflict resolution training, consulting and evaluation company. For over two decades he has been called upon internationally to help people caught in destructive cycles of deep identity-based conflict to understand and transform them into creative opportunities and cooperation.

I strongly recommend this insightful book to anyone interested in the art and science of managing conflicts. The book shows how to avoid the trap of blaming others, and instead to find a path to meaningful coordination.

Rothman’s identity-based conflict analysis and practice has transformed our field. He has developed one method for students, scholars and practitioners that is concerned with creatively engaging identity-based conflict, and a second method for those concerned with a combination of reflective practice and evaluation that fosters cooperation--even as it systematically assesses the work. I am excited about this new volume that Rothman, his students and colleagues have written because, like Rothman's previous books, this one will blaze new paths, improve our thinking as well as our practice.

Jay Rothman, Ph.D. has been an academic/ practitioner in the field of conflict resolution for the past 25 years. In the course of his career, Dr. Rothamn has worked with diplomats, business executives, opposing leaders of embattled communities, union leaders, school boards and superintendents, community activists and students around the world. He is a teacher, trainer and student of the art and science of conflict engagement and he has developed and taught two cutting edge methodologies for conflict engagement and collective visioning. Jay has lectured and taught around the country and the world, presented at many conflict resolution conferences and workshops.