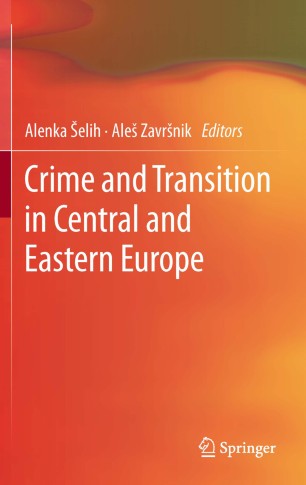 Crime and Transition in Central and Eastern Europe

Full-scale political change affects every level of a society, but perhaps nowhere as strikingly as in the areas of crime policy and law enforcement. Over the past two decades, the European nations that have moved from totalitarianism toward democracy have come to embody this trend, yet reliable sources on crime and law enforcement in these countries have not been readily accessible to the West.

Representing viewpoints seldom available to outsiders, the contributors to Crime and Transition in Central and Eastern Europe analyze changes in criminal activities and crime control strategies in the region, explain the political background underlying these developments, and assess their long-term social impact. Experts from Slovenia, Hungary, Croatia, Serbia, the Czech Republic, Poland, Bosnia and Herzegovina discuss the politicization of crime, the ongoing paradoxes regarding civil liberties, and the future of crime policy in comparative and country-specific terms. Among the topics featured in the book:

With this fascinating insight, Crime and Transition in Central and Eastern Europe is a singular reference for researchers and policymakers in criminology and political science, and historians with a special interest in European affairs and policy.

Dr. Alenka Šelih, Professor Emeritus, Faculty of Law, University of Ljubljana, Member of the Slovenian Academy of Sciences and Arts and member of the Acedemia Europea, London. Her research interests include criminology, victimology and criminal law. She has published extensively in different languages. Prof. Šelih introduced into Slovenian criminology as well as into criminal  law new topics e.g. children's rights, victimology, women's issues, community sanctions. In the eighties, she was active in the first human rights movements in the country. She cooperated with the Council of Europe bodies in crime problems and served as member of differents bodies of the International Society of Criminology, Association Internationale de Droit penal and European Society of Criminology.  She is editorial board member of two  Slovenian legal journals and member of the editorial board of the European Journal  on Criminal Policy and Research.

Dr. Aleš Završnik, Assistant Professor, is a researcher at the Institute of Criminology at the Faculty of Law in Ljubljana. He is a postdoctoral Yggdrasil fellow at the Department of Criminology and Sociology of Law at University of Oslo (2012) and was a postdoctoral fellow at the Max-Planck-Institut für ausländisches und internationales Strafrecht, Freiburg i. Br. (2009) and a fellow of the World Federation of Scientists, Geneva (2008). At the moment he collaborates in the European Cooperation in Science and Technology (COST) Action “Living in Surveillance Societies” and the COST Action “Cyberbullying”. Aleš Završnik edited a book Crime and Technology: How Computers Transform Surveillance and Privacy, Crime and Crime Control? (2010) and published a book Homo Criminalis: Images of a Criminal in High-Tech Risk Society (2009). He has researched and published on theoretical criminology, criminal law and “law and technology”, i.e. cybercrime, cyber-law and surveillance. He is a member of the editorial board of the Masaryk University Journal of Law and Technology.