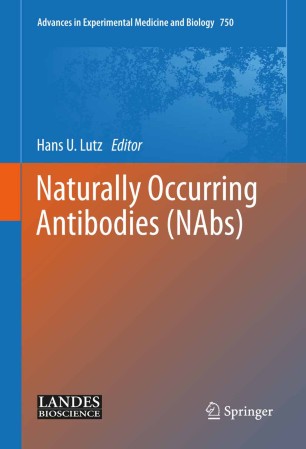 Part of the Advances in Experimental Medicine and Biology book series (AEMB, volume 750)

This volume illustrates the functional properties of NAbs. Authors from pioneering groups report in their chapters on the tissue homeostatic, tissue regenerating and regulatory properties of NAbs and NAbs in pooled human IgG. Scientists interested in the regulation and modulation of components of the immune system found a whole variety of NAbs to cytokines with regulatory and protective functions and NAbs that modulate, e.g., dendritic cells, regulatory T cells, B cells and granulocytes. Considering the large plasma pools and initial difficulties in preparing IVIG that does not induce adverse effects upon infusion into recipients, this volume ends with a historical chapter on how pooled human plasma was fractionated and the IgG component pretreated for a safe intravenous application.

Hans U. Lutz, born May 5, 1942 is a Swiss citizen. He completed his studies in microbiology and biochemistry with a PhD at the University of Zurich in 1971 and received “summa cum laude” for the exam and his dissertation on photophosphorylation in chromatophores of Rhodospirillum rubrum in the group of Prof. R. Bachofen. During his postdoctoral period he got familiar with the characterization of artificial membranes (Prof. P. Läuger, University of Konstanze, Germany) and with membrane biochemistry at the Worcester Foundation for Experimental Biology, Shrewsbury, USA, in collaborating with Prof. J. Palek and G. Fairbanks. His interest in red blood cell (RBC) membrane biochemistry was the basis for the discovery that AT P‑depletion of RBC results in the release of hemoglobin‑filled vesicles that lack the cytoskeleton. In returning to Switzerland in 1976 he joined the Institute of Biochemistry at the Swiss Federal Institute of Technology (ETH ), where he eventually had a tenure position until his retirement, some teaching duties in biochemistry and immunology (complement), for some years extra responsibilities in the research commission of the ETH, the European group for red cell membrane research, the Board of the European complement network, and throughout the time he had the freedom of an investigator to get grant money and bright PhD students. He developed his own research field related to RBC aging. In the late 70s and early 80s he isolated and described the first IgG naturally occurring antibodies (NAbs) to red blood cell membrane proteins (to spectrin and to band 3 protein) and presented evidence for their role in tissue homeostasis. The low affinity IgG anti‑band 3 NAbs directed to the anion transport protein bind bivalently to oligomerized band 3 protein as generated during erythrocyte aging and oxidative damage. In trying to understand how such low titer, low affinity NAbs can effectively opsonize erythrocytes, he found with his group that immune‑complexed anti‑band 3 NAbs preferentially capture dimeric C3b because these NAbs have a rare affinity for C3 within the Fab portion. Indeed, artificially generated C3b2‑IgG complexes stimulated complement amplification 750 times better than C3b. In extending these findings his group discovered that dimeric C3b deposits best to any immune complex formed from F(ab’)2 because the lack of the Fc portion facilitates deposition of dimeric C3b, but dimeric C3b deposits only if the F(ab’)2‑IC is rigidified by bound IgG anti‑hinge NAbs. Thus, anti‑hinge NAbs that normally downregulate antibody production by B cells (Terness et al) contribute to initiation of a systemic inflammatory reaction when proteases released from neutrophils and pathogens (primarily elastase) cleave IgG molecules into F(ab’)2 fragments. He could verify with his group and clinicians that at the onset of a systemic inflammatory response in sepsis stimulation of complement amplification (factor Bb) is proportional to F(ab’)2 production and both parameters depend linearly on liberated elastase.