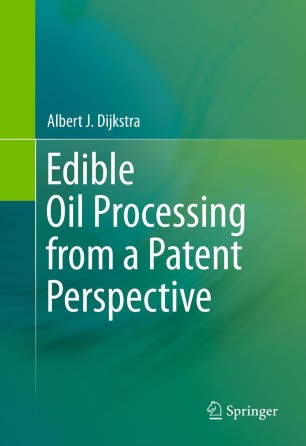 Patent literature has always been a mine of information, but until recently, it was difficult to access. Now, with the Internet, access to all patent documents is almost instantaneous and free. However, interpreting the technical information provided by patent literature requires a certain skill. This monograph aims to provide that skill by explaining patent jargon and providing background information on patenting.

Patents dealing with edible oil processing are used to explain various aspects of patenting. To make the explanations less impersonal, some have been larded with personal remarks and experiences. Accordingly, this monograph is intended for scientists and engineers dealing with edible oils and fats who want to extend their sources of technical information. Hopefully, it will inspire them to innovate, help them to avoid duplication, and provide them with some amusement.

Albert Dijkstra studied chemistry at Leiden University, specializing in gas kinetics. He never received any specific training in the three subjects treated in this monograph: lipid chemistry, chemical technology, and patents. That may be the reason why he continues to query what he does not understand in these subjects, question established truths, and expose myths. As a result, he has developed several novel processes in the field of directed interesterification, degumming, dry fractionation, and the regeneration of spent bleaching earth. He has also derived an equation for the stripping medium usage in continuous counter-current vacuum stripping, suggested an improved mechanism for the chemical interesterification reaction, contributed to the understanding of the hydrogenation process by highlighting the role of the hydrogen concentration, and introduced the determination of trace metals by ICP in the field of edible oil analysis.

This has led to wide recognition: AOCS Chang Award (1997), EuroFedLipid Technology Award (2002), AOCS Bailey Award (2009), AFECG Chevreul Medal (2009), AOCS Mounts Award (2010). He is also a Fellow of the AOCS and Associate Editor of its journal and its Lipid Library website. Although retired, he is active as a scientific consultant, author, editor, inventor, and lecturer.