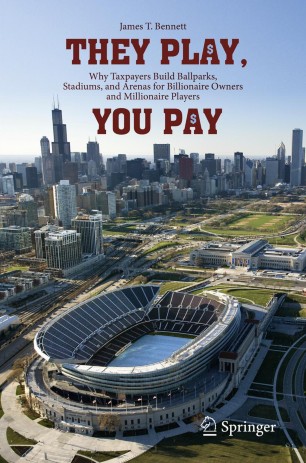 They Play, You Pay

Why Taxpayers Build Ballparks, Stadiums, and Arenas for Billionaire Owners and Millionaire Players

They Play, You Pay is a detailed, sometimes irreverent look at a political conundrum: despite evidence that publicly funded ballparks, stadiums, and arenas do not generate net economic growth, governments keep on taxing sales, restaurant patrons, renters of automobiles, and hotel visitors in order to build ever more elaborate cathedrals of professional sport—often in order to satisfy an owner who has threatened to move his team to greener, more subsidy happy, pastures.  This book is a sweeping survey of the literature in the field, the history of such subsidies, the politics of stadium construction and franchise movement, and the prospects for a re priva¬ti¬zation of ballpark and stadium financing. It ties together disparate strands in a fascinating story, examining the often colorful cases through which governments became involved in sports. These range from the well known to the obscure—from Yankee Stadium and the Astrodome to the Brooklyn Dodgers’ move to Los Angeles (to a privately built ballpark constructed upon land that had been seized via eminent domain from a mostly Mexican American population) to such arrant giveaways as Cowboys Stadium. It examines alternatives that might lessen the pressure for public subsidies, whether the Green Bay Packers model (in which the team’s owners are local stockholders) or via league expan¬sions. It also takes a look at little-known, yet significant, episodes such as President Theodore Roosevelt’s intervention in the collegiate football crisis of 1905—a move that indirectly put the federal government on the side of such basic rule changes as the legalization of the forward pass.
They Play, You Play is a fresh look at a political and economic puzzle: how it came to be that Joe and Jane Sixpack in the Bronx and Dallas subsidize the Steinbrenners and Jerry Joneses of professional sport.