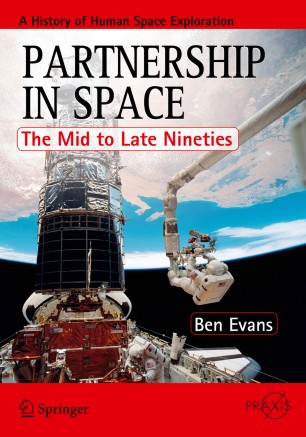 The Mid to Late Nineties

This latest entry in the History of Human Space Exploration miniseries by Ben Evans continues with an in-depth look at the mid to late Nineties. Picking up where Tragedy and Triumph in Orbit: The Eighties and Early Nineties left off, the story commemorating the evolution of manned space exploration unfolds here in yet more detail. More than fifty years after Yuri Gagarin’s pioneering journey into space, Evans extends his comprehensive overview of how that momentous journey continued through the decades that followed.

Partnership in Space, the fifth book in the series, explores the final years in which the United States and the Soviet Union – which became the Commonwealth of Independent States in 1992 – pursued human space endeavors independently of each other.

The narrative follows the path taken by two old foes towards an unlikely and often controversial partnership. As the Shuttle program recovered from the loss of Challenger and pursued ever loftier goals, including the ambitious repair of the Hubble Space Telescope, Mir suffered from economic collapse and political neglect. Yet both Mir and the Shuttle formed a fertile ground upon which the seeds of what would become today's International Space Station were sown.

Both nations acutely needed the support of the other to achieve their goals. As political relations thawed between the two superpowers, a new relationship was forged. This cooperation saw Russians flying aboard the Shuttle and Americans flying aboard Mir and became a partnership that endures to this day.

Ben Evans is an accomplished and experienced space writer ideally qualified to chronicle the epic story of human space exploration. In addition to writing five books for Springer/Praxis, including the first book in this series: Escaping the Bonds of Earth: The Fifties and Sixties (2009), Foothold in the Heavens – The Seventies (2010), and the most recent At Home in Space (2011). He has published numerous space and astronomy related articles in such journals as Spaceflight, Countdown, and Astronomy Now.

“The description of launches, missions, experiments, and operations is comprehensive, and the biographical information presented on astronauts and their accomplishments as well as their personal lives is well done. This book will primarily benefit those interested in the nitty-gritty details of humans in space history. Summing Up: Recommended. Comprehensive space history collections, graduate students and above.” (A. M. Strauss, Choice, Vol. 51 (9), May, 2014)
Buy options