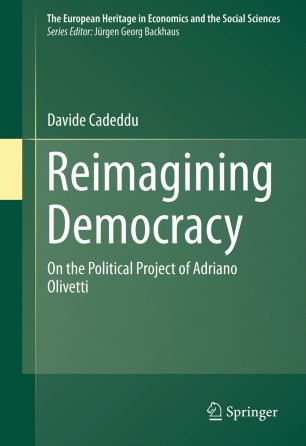 On the Political Project of Adriano Olivetti

Part of the The European Heritage in Economics and the Social Sciences book series (EHES, volume 15)

In the journal articles, historiographical essays, and numerous references to the political thought of Adriano Olivetti, the term constantly used to characterize his thinking is ‘utopia’. It is from this word, or rather, the misuse of this word, where one can begin to shed light on Olivettian political thinking.

The term ‘utopia’, which has come to designate an entire vein of political literature, has also entered into common usage to define an impossible project, a wide-eyed dream; and a ‘utopian’ is that individual who longs for abstract projects instead of concrete ideas. It would be unproductive to resort to the diverse arguments of Firpo, of Mannheim, or of Bloch, of the philosophers of the Frankfurt School or others, since, as Giovanni Sartori has observed, after the word ceases to exist – where utopia is understood to mean impossibility – the impossibilities still remain. So, precisely because the literature on the political thought of Olivetti appears to suffer greatly from ‘empirical’ influences, it seems necessary to confront the complexities of his presumed utopianism with a methodological approach.

This book investigates the inherent ‘impossibilities’, if they indeed exist, in the political thought of Olivetti. It also seeks to understand, as a result, if the Olivettian ideal is lacking in any true consistency, since it is secluded from an adequate analysis of historical reality, or if it is, rather, an idealism which does not lose sight of reality, in an attempt to overturn it as the basis for a plausible global vision.​  This book will be of interests to students and scholars in history, political economy and philosophy.

After classical high school, he graduated in History in 2001 at the Faculty of Arts and Philosophy of the State University of Milan, where in 2004 he also obtained a PhD in European Society and International Life in the Modern and Contemporary Era, and where now he is researcher of History of Political Thought. He is member of the executive council of the Société européenne de culture. Sub-editor of the journals “Amministrare” (Administering) and “Storia Amministrazione Costituzione” (History Administration Constitution) of the Istituto per la scienza dell’amministrazione pubblica (Institute for the Science of Public Administration), he is coordinator of the international journal “Comprendre. Revue de politique de la culture”. He is member of the Società italiana per lo studio della storia contemporanea (Italian Society for the Study of Contemporary History), the Società storica lombarda (Lombard Historical Society), the European Society for the History of Political Thought and the Associazione italiana degli storici delle dottrine politiche (Italian Association of Historians of Political Thought), whose site aisdp.it he is sub-editor, responsible for the section “Strumenti online” (Online Tools). He collaborates with the “Supplemento bibliografico” (Bibliographic Supplement) published in “Il pensiero politico. Rivista di storia delle idee politiche e sociali” (The Political Thought. Journal of History of Political and Social Ideas) and, occasionally, with some national newspapers. He has studied mainly the history of twentieth-century political thought, with emphasis on the problems of autonomy, federalism, elitism, and the relationship between politics and culture.