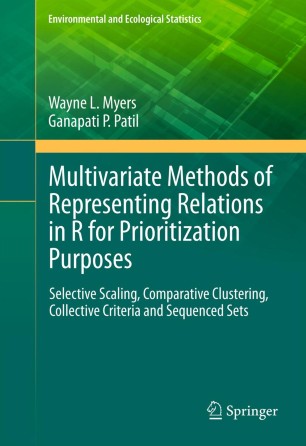 Multivariate Methods of Representing Relations in R for Prioritization Purposes

This monograph is a four-fold featuring of adaptive analysis.

· First is data distillation and comparative coupling whereby the results of one analysis are fed forward into another analysis without necessarily returning directly to the original data matrix, and analytical avenues usually seen as alternatives are pursued in parallel with results being carried forward together as complementary comparatives.

· Second is the flexibility and suitability of the R© statistical software system for engaging in such adaptive and conjunctive statistical strategies.  The intention is to provide an extensive entry into the realms of R using exploration by example whereby a demonstrative dataset of manageably moderate size is carried comparatively though the sequence of sections.

· Third is a major mission to introduce innovative methodologies for preliminary and/or partial prioritization that arise from partial order theory.  We formulate functions in R that provide for generation and visualization of partial orderings based on combinations of criteria.  These methods support etiological exploration for explanations that underlie apparent concurrence or conflict among multiple indicators of suitability or severity.