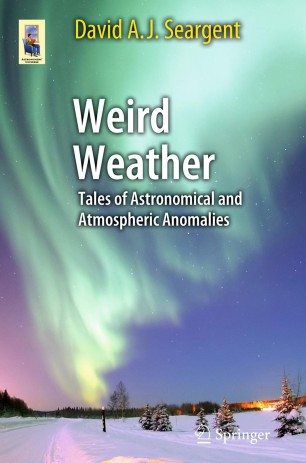 Tales of Astronomical and Atmospheric Anomalies

Have you ever heard the story of the tornado that lifted a man’s wallet right from his pants pocket? What about the myth of the Min-Min light in Australia?  Do you have a story about seeing the “Green Flash” or want an explanation of the mysterious Sun Dogs?

Weird Weather: Tales of Astronomical and Atmospheric Anomalies is about the strange, unusual, and inexplicable events that take place in the air and sky. These include meteors that appear inside a darkened house, ghost lights that follow lone travelers, lightning emerging from patches of fog, and much more. Many of these climatic brainteasers occur within Earth’s skies, but there are parallel curiosities on other worlds, including: lightning on Venus, methane spouts on Titan, thunderstorms twice the size of Earth on Saturn, whirlwinds and dust storms on Mars , and auroras on Jupiter!

Just as atmosphere and outer space are not separated by a sharp boundary, so the subject of this book is not confined to the skies. Earth is the way it is because of its location in the wider universe. Weird Weather: Tales of Astronomical and Atmospheric Anomalies is for those who are fascinated by the spectacular effects of climate and weather on other worlds and our own endlessly fasincating blue planet in the Solar System.