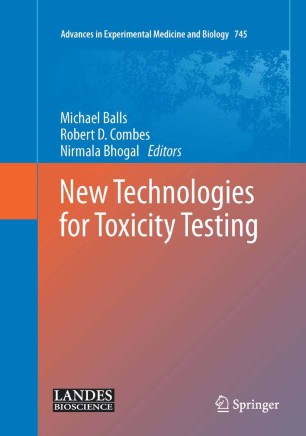 Part of the Advances in Experimental Medicine and Biology book series (AEMB, volume 745)

The central theme running through this volume on New Technologies for Toxicity Testing is the development and application of advanced techniques for cell and tissue culture, as well as new markers and endpoints of toxicity, as alternatives to the traditional paradigm of relying on data from laboratory animal tests to undertake labelling and risk assessment. Of course, many of the techniques and methods described in this volume are in the early stages of development, and much work will be needed to ensure their further improvement, optimisation and validation. However, we are confident that this will be achieved and that, just as with the in vitro assays that were validated and granted regulatory acceptance over the last decade, these, and many other new, advanced methods, will likewise become part of the toxicologist’s improved toolbox for coping with increasingly stringent and numerous regulatory requirements and test chemicals, while placing less reliance on traditional testing paradigms.

MICHAEL BALLS read Zoology at Oxford University, and, after postgraduate studies in Switzerland and postdoctoral research in the USA, returned to Britain in 1966, to become a Lecturer in the School of Biological Sciences at the University of East Anglia. In 1975, he moved to the University of Nottingham Medical School, as a Senior Lecturer, and was later promoted to Reader in Medical Cell Biology and then to Professor of Medical Cell Biology. He is now an Emeritus Professor of the University. Professor Balls became a Trustee of FRAME (Fund for the Replacement of Animals in Medical Experiments) in 1979, and has been Chairman of the Trustees since 1981. He has been Editor of ATLA (Alternatives to Laboratory Animals) since 1983. He acted as an adviser to the British Government during the drafting and passage through Parliament of the Animals (Scientific Procedures) Act 1986, and, from 1987-1995, was a founder member of the Animal Procedures Committee, which advises the Government on all matters related to animal experimentation. In 1993, Professor Balls became the first Head of the European Centre for the Validation of Alternative Methods (ECVAM), which is part of the Institute for Health & Consumer Protection of the European Commission’s Joint Research Centre, located in Ispra, Italy. ECVAM is responsible for leading and coordinating efforts at the European Union level, which are aimed at reducing, refining and replacing the use of laboratory animal procedures in research, education and testing, through the development and validation of advanced testing methods. He retired from ECVAM at the end of June 2002, but continues to devote much of his time to FRAME.

ROBERT D. COMBES is an independent consultant in toxicology. He has held positions in academia and industry, where he broadened his interests to cover in vitro toxicology, biotransformation, in silico prediction, and the Three Rs (reduction, refinement and replacement) as applied to laboratory animal experimentation. He was Scientific Director, then Director, of FRAME (Fund for the Replacement of Animals in Medical Experiments) from 1994 to 2008. He has published numerous papers, book chapters and conference proceedings, and has served on many national and international committees. He is a Fellow of the Society of Biology in the UK, has been on the editorial board of several international journals, the secretary of the United Kingdom Environmental Mutagen Society (UKEMS) and the president of the European Society of Toxicology In Vitro (ESTIV), and is now an honorary member of ESTIV.

NIRMALA BHOGAL has a first degree in Biochemistry and Pharmacology, and a PhD in Biochemistry and Molecular Biology from Leeds University, where she was a research fellow from 1991 to 2004 and specialised in rational drug design and protein chemistry. She also obtained a Postgraduate Diploma in Law from Leeds Metropolitan University. She joined FRA ME (Fund for the Replacement of Animals in Medical Experiments) in 2004, and was the Charity’s Scientific Director. Her work focused on the use of human volunteers and the application of biotechnology in the development of alternatives to the use of animal in biomedical research, and in particular, in the discovery, development and delivery of therapeutics. Since leaving FRAME in 2010, Dr Bhogal has established a legal–scientific consultancy.