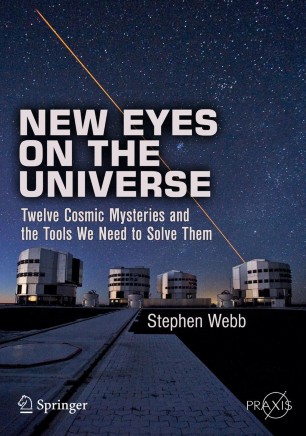 New Eyes on the Universe

Twelve Cosmic Mysteries and the Tools We Need to Solve Them

Today's scientists have at their command a wide range of sensitive and powerful instruments, not only those that capture electromagnetic radiation but also 'telescopes' for cosmic rays, neutrinos, gravitational waves, and dark matter. Using the vast amount of observational data produced by this new generation of observatories and telescopes, New Eyes on the Universe shows how some of the outstanding puzzles inherent in our emerging world view might be solved. With color illustrations throughout the text, this book is a fascinating exploration of the mysteries that the Universe still contains, such as

- What is causing the Universe to blow itself apart?
- What could be powering the luminous gamma-ray bursters?
- Where is all the matter in the Universe?
- Do other Earths exist?
- What is the nature of dark matter?

New Eyes on the Universe looks at these and other key issues in modern astronomy and cosmology. It explains clearly, without recourse to mathematics, why each question is puzzling and worthy of research.

Dr. Stephen Webb has a B.Sc. in Physics from Bristol University, and Ph.D. in Theoretical Physics from Manchester University. He was elected as a Member of Institute of Physics and awarded status of Chartered Physicist. Stephen has three previous books with Springer, including; “Measuring the Universe: The Cosmological Distance Ladder” (1999), “If the Universe is Teeming with Aliens…Where Is Everybody” (2002), and “Out of this World” (2004). All have been well received and reviewed. “If the Universe is Teeming with Aliens…Where is Everybody?” has won several awards and was shortlisted for the prestigious Aventis Prize for popular science writing. All three books deal with areas of astronomy and cosmology that have seen tremendous advances in recent years.

“‘New Eyes on the Universe’ shows that there is plenty more research subjects in astronomy and cosmology, that we are just beginning to find out more about. … Overall this book also introduces astronomical research in almost all wavelengths … and the telescopes that are only just new being built or will be in the future. It is definitely a book that might inspire young readers to go into astronomy.” (Kadri Tinn, AstroMadness.com, February, 2014)

“Explains in an engaging, nonmathematical way how this new generation of ‘telescopes’ is being used to attack a dozen of the ‘cream of the crop’ astronomical puzzles of current times--and why they are so important. … Liberal use of everyday analogies makes even the more difficult material easy to understand. The book is also something of a tour guide to many of the facilities, observatories, and spacecraft at the forefront of astronomy. … Summing Up: Highly recommended. Students of all levels and general readers.” (T. D. Oswalt, Choice, Vol. 50 (3), November, 2012)
Buy options