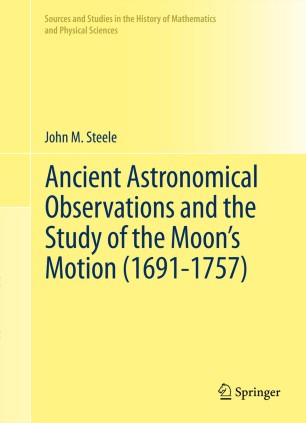 Historians of astronomy, historians of the ancient world, and astronomers will be enriched by the unique and captivating topics covered in this book. This volume contains the first detailed study of the use of ancient and medieval astronomical observations in order to investigate the moon’s secular acceleration—from its discovery by Edmond Halley to the establishment of the magnitude of the acceleration by Richard Dunthorne, Tobias Mayer and Jérôme Lalande in the 1740s and 1750s. The discovery of a gradual acceleration in the moon’s mean motion by Halley in the last decade of the seventeenth century sparked a revival of interest in reports of astronomical observations from antiquity. These observations provided the only means with which to study the moon’s ‘secular acceleration’ as this newly-discovered acceleration became known.

John M. Steele tells the story of how the secular acceleration of the moon was discovered, the reception of its discovery, and the first attempts to determine its size of the acceleration from historical data. Additionally, this study addresses the wider question of how ancient and medieval astronomy was viewed in the eighteenth century; particularly European perceptions of ancient Greek, Arabic, Babylonian, and Chinese astronomy.

Making extensive use of previously unstudied manuscripts, this book explores how different astronomers used the same small body of preserved ancient observations in different ways in their work on the secular acceleration.  Further, the broader context of the study of the moon’s secular acceleration, including its use in debates of biblical chronology and the use of astronomy in determining geographical longitude, are examined.