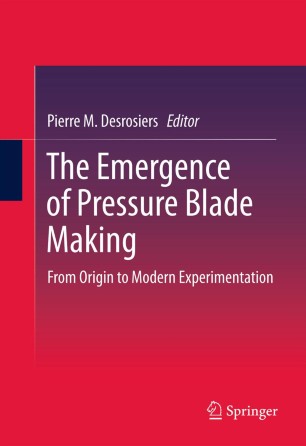 The Emergence of Pressure Blade Making

From Origin to Modern Experimentation

The evolution of humanity has been a long and steady process in which stone tool technology played a prominent role for the bulk of human history. Through advancements in lithic technology, humans were able to adapt to different climates, colonize new territories, and produce new inventions. One important breakthrough occurred with the adoption of pressure blade production, which in some places was closely followed by the beginning of the Neolithic way of life and the development of state societies. It may prove to have been a significant step towards the emergence of more complex societies. It was also a valuable acquisition in hunter-gatherer societies, some of which then proceeded to subsist in previously uninhabited environments such as the High Arctic. The advent of pressure blade production undoubtedly constituted a considerable improvement in stone tool technology, and as such formed a major step in the evolution of human kind.

Research on pressure blade making has intensified to the point where we are now able to compile a global overview on the use of this technique, presented for the first time in this volume. The research assembled here covers the origins, development and eventual abandonment of this technology within a variety of geographical and temporal contexts. This seminal effort presents research into past cultures from around the globe, resulting in a comprehensive portrait of pressure blade production.

This work will be an important reference for anyone studying lithic technology and experimental archaeology, or those interested in the Paleolithic, Mesolithic, and Neolithic periods, as well as the colonization of the New World. More generally, it is of interest to anyone who wants to garner an understanding of the mechanisms of cultural transmission through time and space.