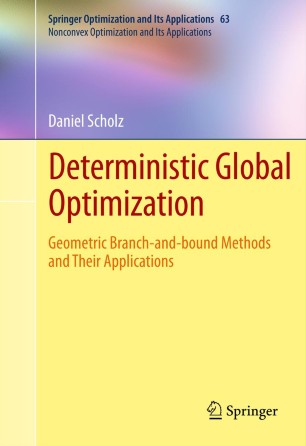 Geometric Branch-and-bound Methods and their Applications

Part of the Springer Optimization and Its Applications book series (SOIA, volume 63)

This monograph deals with a general class of solution approaches in deterministic global optimization, namely the geometric branch-and-bound methods which are popular algorithms, for instance, in Lipschitzian optimization, d.c. programming, and interval analysis.It also introduces a new concept for the rate of convergence and analyzes several bounding operations reported in the literature, from the theoretical as well as from the empirical point of view. Furthermore, extensions of the prototype algorithm for multicriteria global optimization problems as well as mixed combinatorial optimization problems are considered. Numerical examples based on facility location problems support the theory. Applications of geometric branch-and-bound methods, namely the circle detection problem in image processing, the integrated scheduling and location makespan problem, and the median line location problem in the three-dimensional space are also presented.

The book is intended for both researchers and students in the areas of mathematics, operations research, engineering, and computer science.