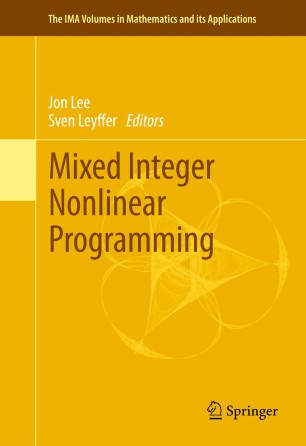 Part of the The IMA Volumes in Mathematics and its Applications book series (IMA, volume 154)

​Many engineering, operations, and scientific applications include a mixture of discrete and continuous decision variables and nonlinear relationships involving the decision variables that have a pronounced effect on the set of feasible and optimal solutions. Mixed-integer nonlinear programming (MINLP) problems combine the numerical difficulties of handling nonlinear functions with the challenge of optimizing in the context of nonconvex functions and discrete variables. MINLP is one of the most flexible modeling paradigms available for optimization; but because its scope is so broad, in the most general cases it is hopelessly intractable. Nonetheless, an expanding body of researchers and practitioners — including chemical engineers, operations researchers, industrial engineers, mechanical engineers, economists, statisticians, computer scientists, operations managers, and mathematical programmers — are interested in solving large-scale MINLP instances.