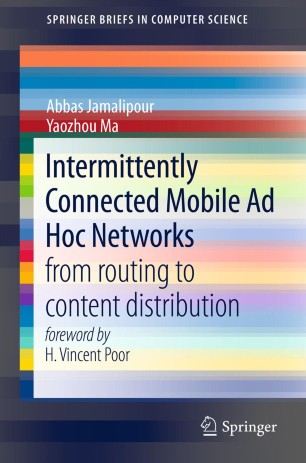 In the last few years, there has been extensive research activity in the emerging area of Intermittently Connected Mobile Ad Hoc Networks (ICMANs). By considering the nature of intermittent connectivity in most real word mobile environments without any restrictions placed on users’ behavior, ICMANs are eventually formed without any assumption with regard to the existence of a end-to-end path between two nodes wishing to communicate. It is different from the conventional Mobile Ad Hoc Networks (MANETs), which have been implicitly viewed as a connected graph with established complete paths between every pair of nodes. For the conventional MANETs, mobility of nodes is considered as a challenge and needs to be handled properly to enable seamless communication between nodes. However, to overcome intermittent connectivity in the ICMANs context, mobility is recognized as a critical component for data communications between the nodes that may never be part of the same connected portion of the network. This comes at the cost of addition considerable delay in data forwarding, since data are often stored and carried by the intermediate nodes waiting for the mobility to generate the next forwarding opportunity that can probably bring it close to the destination. Such incurred large delays primarily limit ICMANs to the applications, which must tolerate delays beyond traditional forwarding delays. ICMANs belong to the family of delay tolerant networks (DTNs). However, the unique characteristics (e.g., self-organizing, random mobility and ad hoc based connection) derived from MANETs distinguish ICMANs from other typical DTNs such as interplanetary network (IPN) with infrastructure-based architecture. By allowing mobile nodes to connect and disconnect based on their behaviors and wills, ICMANs enable a number of novel applications to become possible in the field of MANETs. For example, there is a growing demand for efficient architectures for deploying opportunistic content distribution systems over ICMANs. This is because a large number of smart handheld devices with powerful functions enable mobile users to utilize low cost wireless connectivities such as Bluetooth and IEEE 802.11 for sharing and exchanging the multimedia contents anytime anywhere. Note that such phenomenal growth of content-rich services has promoted a new kind of networking where the content is delivered from its source (referred to as publisher) towards interested users (referred to as subscribers) rather than towards the pre-specified destinations. Compared to the extensive research activities relating to the routing and forwarding issues in ICMANs and even DTNs, opportunistic content distribution is just in its early stage and has not been widely addressed. With all these in mind, this book provides an in-depth discussion on the latest research efforts for opportunistic content distribution over ICMANs.