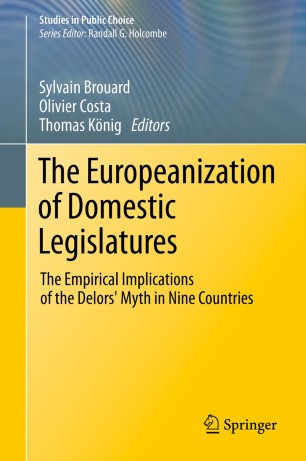 The Europeanization of Domestic Legislatures

The Empirical Implications of the Delors' Myth in Nine Countries

Part of the Studies in Public Choice book series (SIPC)

In ten years 80 per cent of the legislation related to economics, maybe also to taxes and social aff airs, will be of Community origin.” This declaration has been largely quoted, paraphrased and deformed by different authors, creating a persistent myth according to which 80% of the legislative activity of the national legislatures would soon be reduced to the simple transposition of European norms”. This book addresses the topic of the scope and impact of Europeanization on national legislation, as a part of the Europeanization debate which raises normative concerns linked to the “democratic deficit” debate. The state of the art shows that there are many assumptions and claims on how European integration may affect national legislation and, more generally, domestic governance but that there is a lack of solid and comparative data to test them. The aim of the book is to give a solid and comparative insight into Europeanization focusing on effective outcomes in a systematic way. This book analyzes the period 1986-2008 and includes an introduction, a global overview of European legislative activities which set the background for Europeanization of national legislatures, 9 country contributions (8 EU member states + Switzerland) including systematic, comparative and standardized data, tables and figures, and a conclusion with a comparative analysis of the European and domestic reasons for Europeanization.

All national contributions conclude that Europeanization of national legislation is much more limited than assumed in the literature and public debate. It is limited to 10 to 30% of laws (depending on the country), far less than the 80% predicted by Jacques Delors and mentioned daily by medias and public opinion leaders to demonstrate EU domination on member states. Beside that general statement, the various chapters propose a deep insight on EU constraint over national legislation, providing much information on the kind of laws and policies that are Europeanized, the evolution of this process through time, the impact of Europeanization on the balance of powers and the relations between majority and opposition at national level, the strategies developed by national institutions in that context, and many other issues, making the book of interest to academics and policy-makers concerned with Europeanization and national legislation.