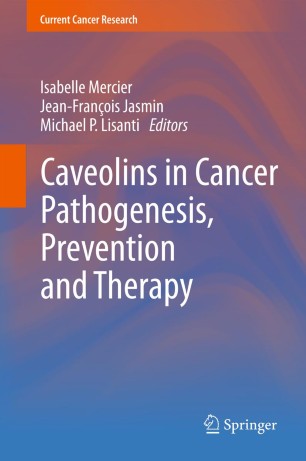 For more than a decade, caveolin proteins have attracted a lot of attention in the field of cancer research. Additional roles besides maintaining the structural integrity of caveolae (meaning “little caves” in latin) have been attributed to these complex proteins. In fact, they have emerged as important regulators of cell signaling, proliferation, invasion and angiogenesis. The current book focuses on caveolin-1, the best-studied and well- characterized of all three caveolin family members (caveolin-1, -2 and -3). As such, the current chapters illustrate the roles of caveolin-1 in breast, prostate, skin, colon, brain and pancreatic cancers, and highlight its specific contribution to tumor growth through epithelial and stromal interactions, as well as its involvement in angiogenesis. This book summarizes the existing literature and provides interesting new perspectives on future advancement and therapeutic possibilities involving caveolins in cancer. This work brings together highly respected and experienced scientists in the field of caveolins who wrote informative chapters on the role of caveolin-1 in cancer in a format that conveys its role as both a tumor suppressor and tumor promoter. We invite you to read, enjoy and be part of these new promising discoveries that are rapidly advancing the field of cancer research.