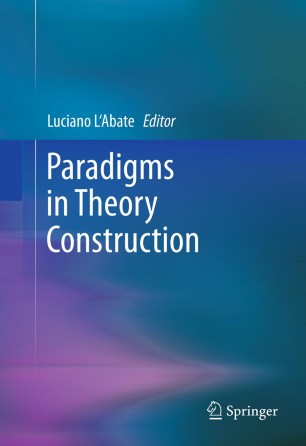 Without the framework of the paradigm supporting layers of theories,models, and data, our concept of science, and its shared mode of scholarly thought, would not exist. The concept is readily understood. But how did we get there?

Paradigms in Theory Construction classifies the collective worldviews that inform paradigms and clarifies the relationships between them, theories, and models in psychology, the hard sciences,and the social sciences. The book skillfully merges the philosophy of science with the history of scientific inquiry to explain how ideas take hold among populations,how paradigms are structured, whether they are based in logic, and under what circumstances paradigm shifts occur. Rich with historical and contemporary examples across disciplines, chapters examine the function of the paradigm for the community of scholars in major arenas of scientific pursuit, among them:

A novel take on how the scientific mind works, Paradigms in Theory Construction will find an engaged audience among general psychologists and those interested in or studying popular science or the history of science.

Since his retirement in 1990, Luciano L’Abate, Ph.D. has been Professor Emeritus at Georgia State University where he was previously a Professor of Psychology beginning in 1965. L’Abate has been an editorial board member of many national and foreign professional and scientific journals, as well as a consultant to various publishing houses. He is the author and co-author of over 300 papers, chapters, and book reviews in professional journals in addition to authoring/editing 34 books. His work has been translated into Chinese, Japanese, Finnish, Spanish, French, Polish, and German languages. Dr. L’Abate is the recipient of many awards including "Family Psychologist of the Year for 1994" by Division 43 of the American Psychological Association, "Outstanding Contribution" by the Georgia Association for Marriage and Family Therapy, and "Outstanding Citizen" by the House of Representatives in the State of Georgia. He has also held workshops and lectured extensively in the United States, Australia, Canada, New Zealand, Japan, Germany, Spain, and Italy. Dr. L’Abate has spent the last several years involved full-time in writing and research since his retirement from Georgia State University.