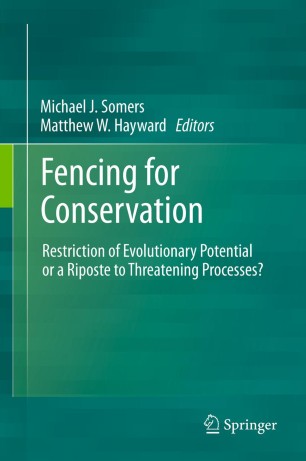 Restriction of Evolutionary Potential or a Riposte to Threatening Processes?

How can we best protect the world’s biodiversity in the face of the growing human population? This question is the central theme of contemporary conservation biology. The protection of biodiversity from overuse by fencing it off from the surrounding landscape is one of the conservation tools available to us. Fences have become common features of our environment and firmly entrenched in our lives, as we use them to surround our farms, houses, and anything we want to keep to ourselves or protect. Within the last few hundred years, conservationists have started using fences to protect biodiversity from overuse and poaching, as well as to protect people from wild animals, especially large carnivores and megaherbivores such as elephants and rhinos. The methodologies for, and approaches to, the use of fences by conservationists vary, and range from the intensive fencing practices in places such as South Africa, to the complete avoidance of fences in other places such as parts of East Africa. In other areas such as Australia and New Zealand fences are used, at enormous costs, not to protect biodiversity from people, but to protect vulnerable native species from invasive alien species such as foxes and cats. Some may argue that biodiversity conservation is not possible without fences, while others argue that the fencing in of biodiversity simply creates zoos and restricts evolutionary potential.

Fencing for Conservation: Restriction of Evolutionary Potential or a Riposte to Threatening Processes? reviews some of the issues regarding fencing for conservation and summarises the current state of knowledge and practice, describing numerous case studies from around the world. As such it will be of interest to students and researchers of conservation biology, invasion biology, ecology and wildlife management.