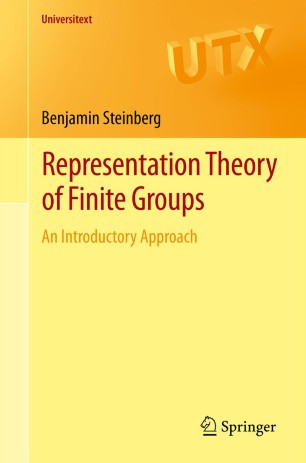 Representation Theory of Finite Groups presents group representation theory at a level accessible to advanced undergraduate students and beginning graduate students. The required background is maintained to the level of linear algebra, group theory, and very basic ring theory and avoids prerequisites in analysis and topology by dealing exclusively with finite groups. Module theory and Wedderburn theory, as well as tensor products, are deliberately omitted. Instead, an approach based on discrete Fourier Analysis is taken, thereby demanding less background from the reader.

The main topics covered in this text include character theory, the group algebra and Fourier analysis, Burnside's pq-theorem and the dimension theorem, permutation representations, induced representations and Mackey's theorem, and the representation theory of the symmetric group. For those students who have an elementary knowledge of probability and statistics, a chapter on random walks on finite groups serves as an illustration to link finite stochastics and representation theory. Applications to the spectral theory of graphs are given to help the student appreciate the usefulness of the subject and the author provides motivation and a gentle style throughout the text. A number of exercises add greater dimension to the understanding of the subject and some aspects of a combinatorial nature are clearly shown in diagrams.

This text will engage a broad readership due to the significance of representation theory in diverse branches of mathematics, engineering, and physics, to name a few. Its primary intended use is as a one semester textbook for a third or fourth year undergraduate course or an introductory graduate course on group representation theory. The content can also be of use as a reference to researchers in all areas of mathematics, statistics, and several mathematical sciences.