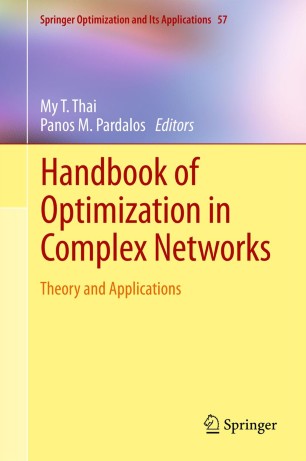 Handbook of Optimization in Complex Networks

Part of the Springer Optimization and Its Applications book series (SOIA, volume 57)

Complex Networks is a newly emerging field with applications in a variety of domains, such as communication networks, engineering networks, social networks, and biological networks. There has been an explosive growth of research on complex real-world networks, a theme that is becoming pervasive in many disciplines ranging from mathematics and computer science to the social and biological sciences. Optimization of complex networks with real-world applications requires a deep understanding of the interplay between the dynamics of the physical network and the information dynamics within the network. The Handbook of Optimization in Complex Networks: Theory and Applications provides the basic theory of these networks with several new mathematical approaches and optimization techniques to design and analyze dynamic complex networks.

The volume features a wide range of applications and optimization problems derived from research areas such as computer science, operations research, cellular and molecular chemistry, brain physiology, epidemiology, and ecology. This volume, as well as its companion (The Handbook of Optimization in Complex Networks: Communication and Social Networks ISBN: 978-1-4614-0856-7) is an excellent resource for graduate students, researchers, and practitioners who wish to learn about the most up to date theory and applications on optimization of complex real-world networks.

Panos Pardalos is Distinguished Professor of Industrial and Systems Engineering at the University of Florida. He is also affiliated faculty member of the Computer Science Department, the Hellenic Studies Center, and the Biomedical Engineering Program. He is also the director of the Center for Applied Optimization. He is the editor-in-chief of the Journal of Global Optimization, Journal of Optimization Letters, and Computational Management Science. In addition, he is the managing editor of several book series, and a member of the editorial board of several international journals. He is the author of 8 books and the editor of several books. He has written numerous articles and developed several well known software packages. His recent research interests include network design problems, optimization in telecommunications, e-commerce, data mining, biomedical applications, and massive computing.

My T. Thai is an Associate Professor in the Computer & Information Science & Engineering department at the University of Florida. Her research interests are centered on the Combinatorial Optimization and its connection to Networks, including communication networks, online social networks, wireless sensor networks, and biological networks. The results of her work have been published in about 60 articles and 4 books since 2005. She has engaged in many professional activities, serving many conferences such as being a conference chair of COCOON 2010 and DIS 2011. She is an associate editor of Journal of Combinatorial Optimization (JOCO), Optimization Letters, and Ad Hoc & Wireless Sensor Networks journal. She is also a guest editor of several other journals and a series editor of Springer Briefs in Optimization. She has received many research awards including a Provost's Excellence Award for Assistant Professors at the University of Florida, a DoD Young Investigator Award, and an NSF CAREER Award.