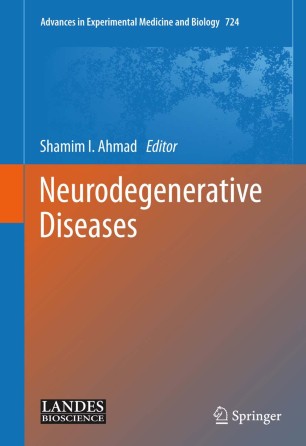 Part of the Advances in Experimental Medicine and Biology book series (AEMB, volume 724)

The editor of this volume, having research interests in the field of ROS production and the damage to cellular systems, has identified a number of enzymes showing ·OH scavenging activities details of which are anticipated to be published in the near future as confirmatory experiments are awaited. It is hoped that the information presented in this book on NDs will stimulate both expert and novice researchers in the field with excellent overviews of the current status of research and pointers to future research goals. Clinicians, nurses as well as families and caregivers should also benefit from the material presented in handling and treating their specialised cases. Also the insights gained should be valuable for further understanding of the diseases at molecular levels and should lead to development of new biomarkers, novel diagnostic tools and more effective therapeutic drugs to treat the clinical problems raised by these devastating diseases.

Shamim I. Ahmad after obtaining his Master’s degree in Botany from Patna University, Bihar, India and his PhD in Molecular Genetics from Leicester University, England, joined Nottingham Polytechnic as Grade 1 lecturer and was subsequently promoted to SL post. Nottingham Polytechnic subsequently became Nottingham Trent University where, after serving for about 37 years, he took early retirement to spend the remaining time writing books and conducting full‑time research. For more than three decades he worked on different areas of biology including thymineless death in bacteria, genetic control of nucleotide catabolism, development of anti‑AIDS drugs, control of microbial infection of burns, phages of thermophilic bacteria and microbial flora of Chernobyl after the nuclear accident. But his primary interest, which started 27 years ago, is DNA damage and repair, particularly near UV photolysis of biological compounds, production of reactive oxygen species and their implications on human health including skin cancer and xeroderma pigmentosum. He is also investigating photolysis of non‑biological compounds such as 8‑methoxypsoralen+UVA, mitomycin C, and nitrogen mustard and their importance in psoriasis treatment and in Fanconi anemia. In 2003 he received a prestigious “Asian Jewel Award” in Britain for “Excellence in Education”. He is also the Editor of Molecular Mechanisms of Fanconi Anaemia, Molecular Mechanisms of Xeroderma Pigmentosum, Molecular Mechanisms of Fanconi Anaemia, Molecular Mechanisms of Xeroderma Pigmentosum, Molecular Mechanisms of Ataxia Telangiectasia, Molecular Mechanisms of Cockayne Syndrome and Diseases of DNA Repair published by Landes Bioscience.