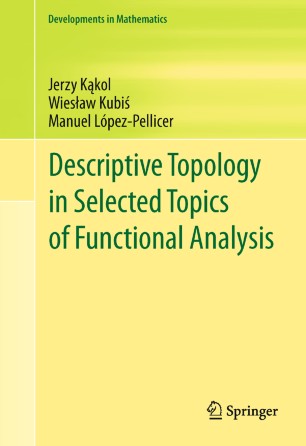 Part of the Developments in Mathematics book series (DEVM, volume 24)

A large mathematical community throughout the world actively works in functional analysis and uses profound techniques from topology. As the first monograph to approach the topic of topological vector spaces from the perspective of descriptive topology, this work provides also new insights into the connections between the topological properties of linear function spaces and their role in functional analysis.

Descriptive Topology in Selected Topics of Functional Analysis is a self-contained volume that applies recent developments and classical results in descriptive topology to study the classes of infinite-dimensional topological vector spaces that appear in functional analysis. Such spaces include Fréchet spaces, LF-spaces and their duals, and the space of continuous real-valued functions C(X) on a completely regular Hausdorff space X, to name a few. These vector spaces appear in distribution theory, differential equations, complex analysis, and various other areas of functional analysis.

Written by three experts in the field, this book is a treasure trove for researchers and graduate students studying the interplay among the areas of point-set and descriptive topology, modern analysis, set theory, topological vector spaces and Banach spaces, and continuous function spaces.  Moreover, it will serve as a reference for present and future work done in this area and could serve as a valuable supplement to advanced graduate courses in functional analysis, set-theoretic topology, or the theory of function spaces.

“The book summarizes many results which describe various aspects of the structure of topological vector spaces … . Most of the chosen material is relatively recent and appears in book form for the first time. … Together with a rich list of references the book can help in finding and understanding many finer questions concerning various aspects of the structure of subclasses of the class of topological vector spaces.” (Petr Holický, Zentralblatt MATH, Vol. 1231, 2012)

“The authors collect a large amount of material displaying connections between general topology and functional analysis with regard to properties of infinite-dimensional topological vector spaces. … It is a fine piece of scholarship with well-organized, readable proofs. … It is an encyclopedia of a subject meant for researchers and advanced graduate students likely interested in research for an advanced degree, and/or adding more knowledge to a course in which they are enrolled.” (E. Beckenstein, Mathematical Reviews, February, 2013)