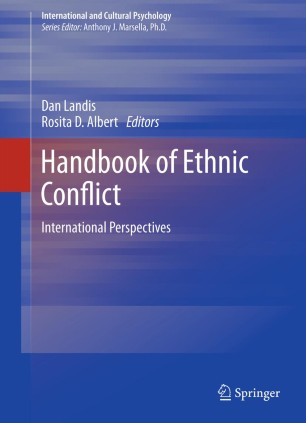 Ethnic conflicts are world-wide phenomena producing discrimination, violence, and at times, unspeakable atrocities. Two thirds of international conflicts today are ethnopolitical conflicts. Some are long-entrenched disputes dating back centuries. Others are the by-products of recent trends in immigration or politics.

The Handbook of Ethnic Conflict examines the social, psychological, historical and political underpinnings of these conflicts—particularly the ethnic, cultural, religious, and national identities that feed ingroup/outgroup antagonistic perceptions and fuel cycles of aggression. It covers leading theories and models of interethnic conflict and provides in-depth analyses of twenty conflicts as diverse as those in Croatia, the Democratic Republic of the Congo, France, Israel, and New Zealand.  It examines phenomena that have not received the attention they deserve, such as the obstacles presented by differing accounts of the origins and dynamics of given conflict. In each case, and in the book’s concluding chapter, contributors suggest creative responses to ethnic friction utilizing innovative intercultural approaches, conflict management approaches, and peace-building strategies.

·         Extensive analyses of the dynamics of interethnic hostility as well as of the relevant current and historical social, psychological, political and economic conditions.

·         Contributors from a variety of cultures and disciplines.

·         Comparisons across diverse conflicts in the concluding chapter.

·         Suggestions for diminishing prejudice and discrimination, and improving inter-ethnic relations in multi-ethnic states

Its unique presentation and wide range of information make the Handbook of Ethnic Conflict an effective reference for professionals, researchers, and educators working to understand, minimize, and eliminate interethnic conflict.Valuable for social psychologists, cross-cultural psychologists, political scientists, sociologists, communications scholars, and policymakers, ultimately, the Handbook is an important source for all persons who wish to contribute to a more peaceful world.