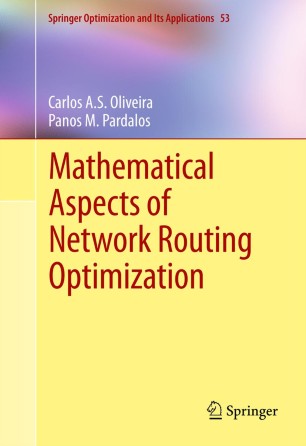 Part of the Springer Optimization and Its Applications book series (SOIA, volume 53)

Mathematical Aspects of Network Routing Optimization provides a thorough introduction to the subject of algorithms for network routing and focuses on multicast and wireless ad hoc systems. The modern world is connected through large-scale, computational networked systems such as the Internet and because of the ever-advancing technology of networking, efficient algorithms have become increasingly necessary to solve some of the problems developing in this area.

This work focuses on computational issues arising from the process of optimizing network routes, such as the quality of resulting links and their reliability. Algorithms are key to understanding the protocols underlying multicast routing. The main objective in the text is to derive efficient algorithms, with or without the guarantee of approximation, that can be applied to address these problems. Notes have been provided for basic topics such as graph theory and linear programming to assist those who are not fully acquainted with the mathematical topics presented throughout the book.

This book is designed for graduate students, researchers, and professionals interested in understanding the algorithmic and mathematical ideas behind routing in computer networks and network algorithms.

Carlos Oliveira obtained a PhD in Operations Research from the University of Florida, a Masters in Computer Science from Universidade Federal do Ceará, Brazil, and a B.Sc. in Computer Science from Universidade Estadual do Ceará, Brazil. Carlos has spent more than ten years working on combinatorial optimization problems in several areas, including telecommunications, computational biology, and logistics. He has written more than 20 papers on optimization aspects of these areas. He is an associate editor for J. of Global Optimization and Optimization Letters.

Carlos was assistant professor at Oklahoma State University from 2004 to 2006. Since then he has worked as a consultant in the areas of optimization and software engineering. He works in New York City and lives in New Jersey with his wife and son. Carlos Oliveira can be contacted at his web site http://coliveira.net.

Panos Pardalos is Distinguished Professor of Industrial and Systems Engineering at the University of Florida. He is also affiliated faculty member of the Computer Science Department, the Hellenic Studies Center, and the Biomedical Engineering Program. He is also the director of the Center for Applied Optimization.Dr. Pardalos obtained a PhD degree from the University of Minnesota in Computer and Information Sciences. Dr. Pardalos is a world leading expert in global and combinatorial optimization. He is the editor-in-chief of the Journal of Global Optimization, Journal of Optimization Letters, and Computational Management Science. In addition, he is the managing editor of several book series, and a member of the editorial board of several international journals. He is the author of 8 books and the editor of several books. He has written numerous articles and developed several well known software packages. His research is supported by National Science Foundation and other government organizations. His recent research interests include network design problems, optimization in telecommunications, e-commerce, data mining, biomedical applications, and massive computing.

“This book provides first an elementary introduction into algorithms for network routing. … In principle, the investigations of this book focus on two major types of problems, namely minimum cost routing and cache placement problems. … The book is well-written in an easily understanding form. … the book can be recommended to graduate students, researchers and professionals interested in routing in computer networks and network algorithms.” (Frank Werner, Zentralblatt MATH, Vol. 1225, 2012)