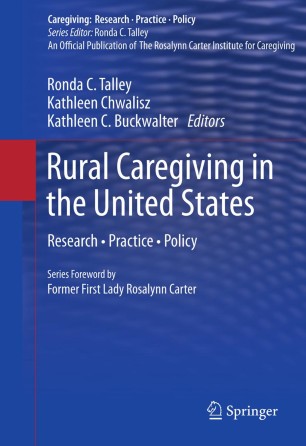 Rural Caregiving in the United States

Caregivers living in rural areas face daunting obstacles. In addition to the isolation and anxiety that many caregivers across the country experience, rural caregivers must also cope with limited access to uncoordinated resources and severe shortages of trained professionals. Although many research, policy, and practice upgrades have been made in response to caregivers’ general concerns, the specific problems facing the rural caregiver have been less frequently addressed.

Focusing on what is known as well as what is needed – and zeroing in on major subgroups within this diverse population – Rural Caregiving in the United States replaces misconceptions of the nonurban experience with real-life issues, findings, and solutions. For example, this pioneering volume:

Ronda C. Talley, Ph.D., MPH, is Executive Director of the Suzanne Vitale Clinical Education Complex at Western Kentucky University and Professor of Psychology. Her prior work experience includes serving as Executive Director of the Rosalynn Carter Institute for Caregiving; Associate Director of Legislation, Policy, and Planning/Health Scientist at the Centers for Disease Control and Prevention; and Associate Executive Director at the American Psychological Association. Dr. Talley received the Outstanding Alumni Award from Indiana University and the Jack Bardon Distinguished Service Award from the Division of School Psychology of the American Psychological Association.

A prolific researcher of issues affecting the elderly, Dr. Buckwalter's work has focused on improving mental health services and providing community-based care for chronically ill older persons. Her specific clinical and research interests are in the area of geriatric mental health. Dr. Buckwalter's research has been funded by several branches of the NIH, including the National Institute on Aging, the National Institute of Nursing Research, and the National Institute of Mental Health, as well as numerous private foundations. She has written extensively in the field of gerontology, authoring more than 250 articles and 80 chapters, and has edited eight books.

In 1999, Dr. Buckwalter received the Distinguished Contribution to Research Award from the Midwest Nursing Research Society and was elected to the National Academy of Sciences Institute of Medicine. In 2001, she was the recipient of the American Psychiatric Nurses Association Excellence in Research Award, and the first recipient of the National Gerontological Nursing Association Board of Directors Award. Currently Dr. Buckwalter serves on numerous review committees, editorial boards, and advisory groups including: the American Psychiatric Nursing Association's Geropsychiatric/Long Term Care Council; the American Academy of Nursing Expert Panel on Aging, Long Term Care Policy Committee, the National Advisory Board for the American Association of Colleges of Nursing's Hartford Gerontology Project; the American Nurses Foundation Board of Trustees; the Long-Term Care Task Force and Polisher Awards Committee of the Gerontological Society of America; and the American Academy of Orthopaedic Surgeons Committee on Aging.