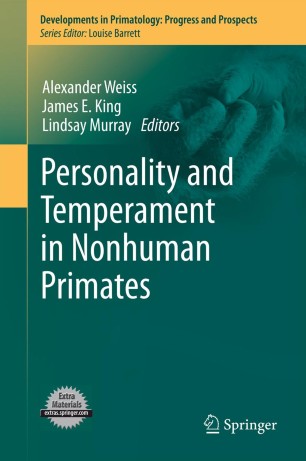 Personality and Temperament in Nonhuman Primates

The result of a symposium hosted by the American Society of Primatologists, this volume attests to the huge strides made in recent decades by researchers studying primates and their behavior. Research into the notion of ‘personality’ in nonhuman primates can be traced back to the 1930s and 40s, when primatologists began to notice large individual differences in the behavioral and emotional disposition of monkeys and apes. Jane Goodall’s work at Gombe National Park pushed the field further, but its perceived anthropomorphism was frowned on for a time. Undeterred, primatologists continued to investigate aspects of personality at Gombe. Peter Buirski’s ‘Emotions Profile Index’ and the Madingley questionnaire used by Joan Stevenson-Hinde and her group were vital developments and even informed work in other species.

With contributions from some of the leading researchers currently exploring the topic, this collection fulfils a need for a comprehensive survey of the latest developments in the study of personality and temperament in nonhuman primates. Yet it also contextualizes the subject by covering early work in the field as well as key ongoing issues such as methodology. A series of chapters then provide analysis of empirical studies that investigate aspects of primate temperament as diverse as impulsivity and aggression and the ecological implications of animal personality. This publication, then, demonstrates the richness and diversity of the field as well as being a source of inspiration for researchers dedicated to investigating the subject.