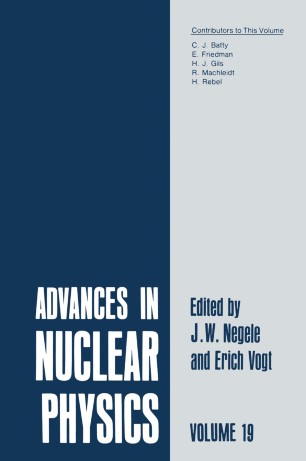 Part of the Advances in Nuclear Physics book series (volume 19)

The two comprehensive reviews in this volume address two fundamental problems that have been of long-standing interest and are the focus of current effort in contemporary nuclear physics: exploring experimentally the density distributions of constituents within the nucleus and understand­ ing nuclear structure and interactions in terms of hadronic degrees of freedom. One of the major goals of experimental probes of atomic nuclei has been to discover the spatial distribution of the constituents within the nucleus. As the energy and specificity of probes have increased over the years, the degree of spatial resolution and ability to select specific charge, current, spin, and isospin densities have correspondingly increased. In the first chapter, Batty, Friedman, Gils, and Rebel provide a thorough review of what has been learned about nuclear density distributions using electrons, muons, nucleons, antinucleons, pions, alpha particles, and kaons as probes. This current understanding, and the limitations thereof, are crucial in framing the questions that motivate the next generation of experimental facilities to study atomic nuclei with electromagnetic and hadronic probes. The second chapter, by Machleidt, reviews our current understanding of nuclear forces and structure in terms of hadronic degrees of freedom, that is, in terms of mesons and nucleons. Such an understanding in terms of hadronic variables is crucial for two reasons. First, since effective hadronic theories are quite successful in describing a broad range of phenomena in low-energy nuclear physics, and there are clear experimental signatures of meson exchange currents in nuclei, we must understand their foundations.