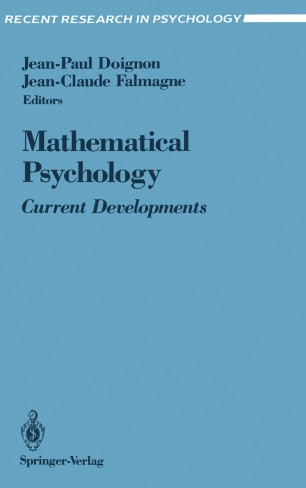 Sometime in the late sixties, one of the editors of this volume realized that the mathematica psychologists in Europe-an odd lot mostly concentrated in Germany, the Netherlands, France, England and Belgium-were suffering from an acute sense of isolation. The papers that they presented at meetings of their national or regional societies had to be 'sanitized' to the point of misrepresentation. They were misunderstood. The mood was grim, depression was lurking. He decided that urgent action was required: a European gathering of mathematical psychologists was called in April 1971. Not being foolhardy, however, he took the precaution of choosing Paris as the meeting place. Around thirty mathematical psychologists received an invitation. They all came, justifying at least Paris's reputation. The meeting took place at the 'Maison des Belges' of the Cite Universitaire, Boulevard Jourdan, in front of the Parc Montsouris. As far as everyone remembers, the meeting was a full success. A happy birth had taken place. This editor then irresponsibly accepted a position in a university in the US, leaving an infant to the whims of the passers-by. Fortunately, a godfather came along. The next meeting took place in Nijmegen, in November 1971, under the loving care of Eddy Roskam. A tradition was established. The third meeting was in Oxford (1972); then in Marseilles (1973), Regensburg (1974), Stirling (1975), Stockholm (1976) . . . The infant became a toddler, then a vigorous child. This annual meeting is now an important event in the field.