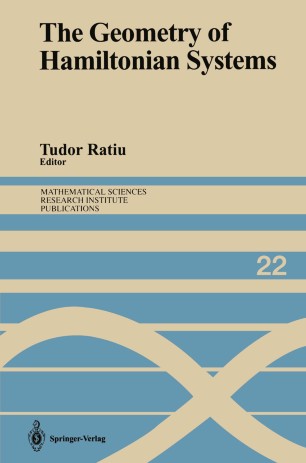 The Geometry of Hamiltonian Systems

The papers in this volume are an outgrowth of the lectures and informal discussions that took place during the workshop on "The Geometry of Hamiltonian Systems" which was held at MSRl from June 5 to 16, 1989. It was, in some sense, the last major event of the year-long program on Symplectic Geometry and Mechanics. The emphasis of all the talks was on Hamiltonian dynamics and its relationship to several aspects of symplectic geometry and topology, mechanics, and dynamical systems in general. The organizers of the conference were R. Devaney (co-chairman), H. Flaschka (co-chairman), K. Meyer, and T. Ratiu. The entire meeting was built around two mini-courses of five lectures each and a series of two expository lectures. The first of the mini-courses was given by A. T. Fomenko, who presented the work of his group at Moscow University on the classification of integrable systems. The second mini­ course was given by J. Marsden of UC Berkeley, who spoke about several applications of symplectic and Poisson reduction to problems in stability, normal forms, and symmetric Hamiltonian bifurcation theory. Finally, the two expository talks were given by A. Fathi of the University of Florida who concentrated on the links between symplectic geometry, dynamical systems, and Teichmiiller theory.