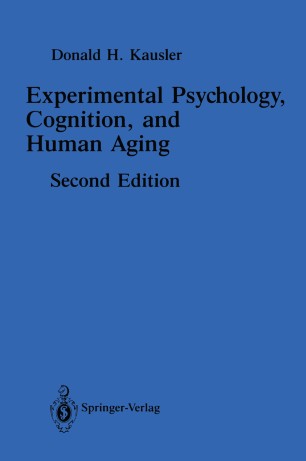 This book is a major revision and extension of my earlier book, Experimental Psychology and Human Aging, which appeared in 1982. The intervening years have seen a remarkable expansion of psychological research on human aging, especially on topics dealing with cognition. They have also seen research on cognitive aging gain increasing importance within the mainstream of basic cognitive research. As my lecture notes for my course in the psychology of aging grew, so did my apprehension regarding the task ahead of me in revis­ ing the first edition. The research explosion in cognitive aging forced several major changes in content from the first to the second edition. Two chapters on learning and memory in the first edition were necessarily expanded to six chapters in the present edition. Similarly, the single prior chapter on percep­ tion and attention became two chapters, as did the single prior chapter on thinking. Another change from the first edition is in the addition of some review of the effects of abnormal aging on various cognitive processes, parti­ cularly in regard to memory functioning. To keep the revision within reason­ able length, some sacrifices had to be made. The multiple chapters on metho­ dology and theory in the first edition were condensed into the present, single chapter. However, the major topics from the first edition were retained and, in fact, added to by the inclusion of important topics and issues that emerged over the past eight years.