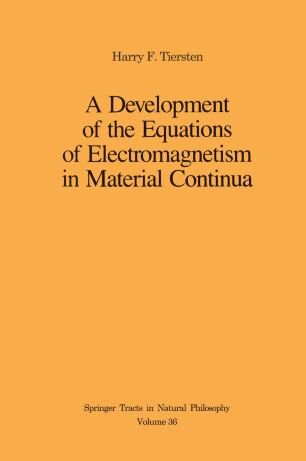 A Development of the Equations of Electromagnetism in Material Continua

This tract is based on lecture notes for a course in mechanics that has been offered at Rensselaer Polytechnic Institute on and off for the past twenty years. The course is intended to provide graduate students in mechanics with an understanding of electromagnetism and prepare them for studies on the interaction of the electric and magnetic fields with deformable solid continua. As such, it is imperative that the distinction between particle and continuum descriptions of matter be carefully made and that the distinction between that which is inherently linear and that which is intrinsically nonlinear be clearly delineated. Every possible effort has been made on my part to achieve these ends. I wish to acknowledge the contributions of a number of students and faculty who attended the lectures over the years and who, by their questions and suggestions, significantly improved some of the sections. This preface would not be complete if I did not point out that my interest in electromagnetism was initiated and my attitude towards the development of the equations was influenced by lectures given by the late Professor R.D. Mindlin at Columbia University in the late nineteen fifties. I would like to thank Professor C. Truesdell for his helpful suggestions, which I feel significantly improved the clarity and readability of the Introduction, and Dr. M.G. Ancona for his comment concerning the clarity of an important point in Sec. 1.1.