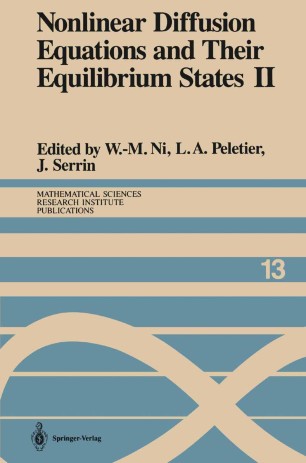 In recent years considerable interest has been focused on nonlinear diffu­ sion problems, the archetypical equation for these being Ut = ~U + f(u). Here ~ denotes the n-dimensional Laplacian, the solution u = u(x, t) is defined over some space-time domain of the form n x [O,T], and f(u) is a given real function whose form is determined by various physical and mathematical applications. These applications have become more varied and widespread as problem after problem has been shown to lead to an equation of this type or to its time-independent counterpart, the elliptic equation of equilibrium ~u+f(u)=O. Particular cases arise, for example, in population genetics, the physics of nu­ clear stability, phase transitions between liquids and gases, flows in porous media, the Lend-Emden equation of astrophysics, various simplified com­ bustion models, and in determining metrics which realize given scalar or Gaussian curvatures. In the latter direction, for example, the problem of finding conformal metrics with prescribed curvature leads to a ground state problem involving critical exponents. Thus not only analysts, but geome­ ters as well, can find common ground in the present work. The corresponding mathematical problem is to determine how the struc­ ture of the nonlinear function f(u) influences the behavior of the solution.