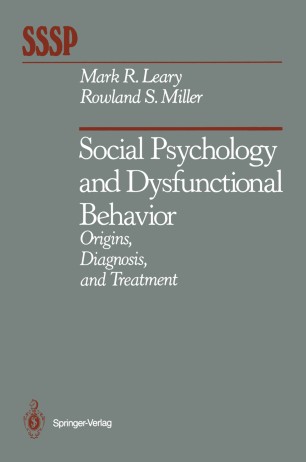 A colleague recently recounted a conversation she had had with a group of graduate students. For reasons that she cannot recall, the discussion had turned to the topic of "old-fashioned" ideas in psychology-perspectives and beliefs that had once enjoyed widespread support but that are now regarded as quaint curiosities. The students racked their brains to outdo one ofthe historical trivia of psychology: Le Bon's another with their knowledge fascination with the "group mind," Mesmer's theory of animal magnetism, the short-lived popularity of "moral therapy," Descartes' belief that erec­ tions are maintained by air from the lungs, and so on. When it came his tum to contribute to the discussion, one student brought up an enigmatic journal he had seen in the library stacks: the Journal of Abnormal and Social Psychology. He thought that the inclusion of abnormal and social psychology within the covers of a single journal seemed an odd combination, and he wondered aloud what sort of historical quirk had led psychologists of an earlier generation to regard these two fields as somehow related. Our colleague then asked her students if they had any ideas about how such an odd combination had found its way into a single journal.