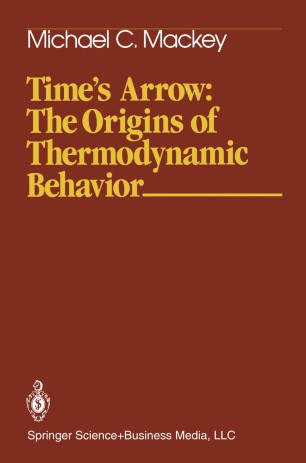 The Second Law of Thermodynamics has been called the most important law of nature: It is the law that gives a direction to processes that is not inherent in the laws of motion, that says the state of the universe is driven to thermal equilibrium. Its mathematical formulation is simple: The entropy of a closed system cannot decrease. Since the recognition that macroscopic phenomena have an atomic basis, it has remained a fundamental problem to reconcile the increase of entropy with the known reversibility of all the laws of microscopic physics. Professor Michael Mackey of McGill University here explores the dynamical basis for the Second Law, that is, he seeks to illuminate the fundamental dynamical properties required for the construction of a successful statistical mechanics. Aimed at physicists and applied mathematicians with an interest in the foundations of statistical mechanics, the book includes such new material as: a demonstration that the black body radiation law can be deduced from maximal entropy principles; a discussion of sufficient conditions for the existence of at least one state of thermodynamic equilibrium; a description of the behavior of entropy in asymptotically periodic systems; a necessary and sufficient condition for the evolution of entropy to a global maximum; and a presen- tation of the three main types of ergodic theorems and their proofs. He also explores the potential role of incomplete knowledge of dynamical variables, measurement imprecision, and the effects of noise in giving rise to entropy increases.